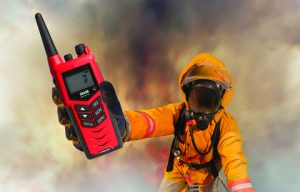 The International Maritime Organization’s (IMO) unified interpretation of the essential safety requirements of the fire-fighter radio, and the European Union’s (EU) addition of the fire fighter radio in the Marine Equipment Directive (MED) mean enhanced safeguarding for life and assets in the most extreme and dangerous situations at sea. The regulatory updates are a further seal of approval for Cobham’s SAILOR 3965 UHF Fire Fighter radio, which is already compliant with both regulatory updates.

SOLAS regulations require all vessels to carry two-way fire-fighter radios which enable trained seafarers to communicate effectively in an emergency; detecting and extinguishing fires before they cause significant risk to life and a vessel’s integrity.

The IMO’s new unified interpretation of the essential safety requirements of fire-fighter radios is based on recommendations from the International Association of Classification Societies (IACS), to set a minimum level for intrinsically safety.

Approval under the MED is based on dedicated maritime standards, taking the harsh environment and users’ conditions into consideration. The decision to include the fire-fighter radio in the MED, which contains more stringent approval procedures, demonstrates the EU’s commitment to ensuring radios are fit for purpose and better supports life at sea safety provision.

Commenting on regulatory changes, Peter Andersen, Business Development Manager at Cobham SATCOM, said: “Safety of life at sea is the starting point for everything we do. The alignment of our SAILOR 3965 Fire Fighter Radio with these new IMO and EU regulations is the latest example of our philosophy in action. We hope to continue driving further improvements in seafarer safety through our world-leading R&D process, which has supported seafarer welfare for more than 50 years.”

From 3 October 2022, all new fire-fighter radios installed on-board EU flagged vessels have to be Wheelmark approved to prove compliance with the MED. Until that date, Radio Equipment Directive (RED) CE marked radios will be accepted.