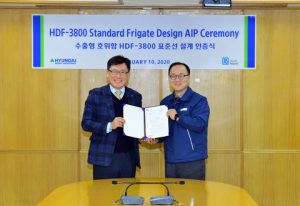 New design allows for the frigate to be equipped with modern weapons and sensors.

The design allows for the frigate to be equipped with modern weapons and sensors, and it will be able to undertake Anti-Air Warfare (AAW), Anti-Surface Warfare (ASuW), and Anti-Submarine Warfare (ASW) missions. Additional combat capabilities include Electronic Warfare (EW), Land Attack Warfare (LAW) and the capability of anti-drone systems and to launch and recover unmanned aerial vehicles (UAVs).

Furthermore, the ship will adopt the new HHI Hi-Bow hull, reflecting the most modern and hydrodynamically efficient design to maintain operational and war fighting capability in extreme environmental conditions.

The capabilities of this ship are such that it is expected to meet the most demanding requirements of international customers. By awarding this AiP, LR has helped the yard assure the integrity and reliability of the design and demonstrate compliance with government regulations, industry codes and standards.

Sang-Hoon Nam, COO of Naval and Special Ship Business Unit at HHI, said: “We expect this design will enhance HHI’s competitiveness in international markets including Asia, MENA, Latin America as well as some European countries. We are pleased to once again demonstrate the excellence of Korean defence technology with this AiP.”