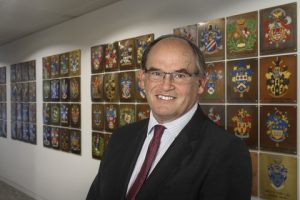 13 March 2020 – The UK Chamber of Shipping has launched its new Strategic Plan for the next five years on the day John Denholm took over from Sir Michael Bibby as Chamber President.

The new Strategic Plan, which was signed off at the Chamber’s AGM on 12 March, outlines the plans and priorities for the Chamber and confirms its position as the voice of the UK shipping industry which contributes nearly £20bn a year to our economy and supports over 180,000 jobs.

At the AGM it was also confirmed that Graham Westgarth, Chief Executive Officer of V.Group will become the Chamber’s Vice-President.

“Sir Michael Bibby has been an outstanding President and I want to thank him for all that he has done over the last two-years. He has provided strength, direction and outstanding leadership at a time when it’s been needed more than ever.

“As we launch our new Strategic Plan now is the time to look to the future. As we forge a new path for ourselves outside the EU, we need to look ahead to the opportunities and challenges which arise. We are in a changing world and issues such as climate change and automation will have a profound effect not only on shipping but on the wider world and as a Chamber, working with colleagues across the sector, we can provide strong leadership to ensure the industry as a whole rises to these challenges.”

“It has been a great honour to lead the Chamber during the last two-years. They have been turbulent years in Westminster and Brussels, but the UK Chamber of Shipping has worked hard with government and industry to protect the UK shipping sector.

“I am particularly proud of the work we have done in creating the Safety Culture Charter as well as developing robust green policies. I know John Denholm will be an outstanding President and I wish him, and the whole Chamber well.”

“I would like to add my personal thanks to Sir Michael for his leadership and guidance over the past two years. I am also delighted to welcome John Denholm as President and Graham Westgarth as Vice-President.

“To ensure the UK Chamber of Shipping is setting the agenda and leading from the front, we have today updated our five-year Strategic Plan. The refreshed document sets out a clear direction in which the Chamber wants to head, and makes sure we are working with our members and setting a strategic narrative to tackle new challenges and identify future opportunities.”

The Chamber also launched its updated Journal during the AGM looking back at the last twelve months and what issues the industry may face in 2020. The full Journal and the Strategic Plan here.

Budget 2020: What does it mean for shipping?

Join WOC Webinar to Learn About the Global...