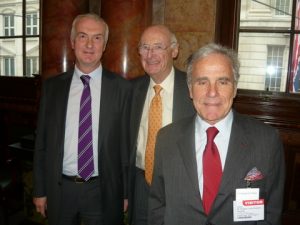 An IMIF buffet luncheon was held on Wednesday 23 November 2011 hosted by Tom Boardley, Marine Director, Lloyd’s Register with the guest speaker’s presentation being made in the hallowed General Committee Room. There, in a surrounding of panelled walls inlaid with biblical nautical quotations and gleaming columns and portraits of the mighty looking down benevolently on him the guest speaker, Philippe Louis-Dreyfus OBE, President of Louis Dreyfus Armateurs responded to the invitation made by IMIF Chairman Jim Davis to talk on the challenges facing an independent shipowner.

He talked of the old challenges – the first being competition – now worldwide, global and even more competitive than in the past, reminding his high-profile audience that there were not only economic factors to face but something that had always been there in shipping – ‘cycles’. Another challenge he added was not losing your commonsense when the market is bullish and high. Another challenge is that of image and shipping’s image is not always good. The last of the old challenges is money – sometimes there is too much – it comes flooding in – then as part of the ‘cycle’ there is a shortage.  As for the new challenges – for a start competition coming from new countries, China being an obvious example. And now money is scarce – the banks are not there because because shipping is not fashionable but also because the banks are not interested in long-term money, only short-termism. And of course something that IMIF has been saying for years – there are already too many ships in existence and too many more being built. There are now far more demanding environmental factors to accommodate combined with owners who are non-reactive. And the last challenge is much more noticeable now, Philippe Louis-Dreyfus said. In shipping it was always the case that my word is my bond – that is no longer happening – there is a problem of ethics – people are not sticking to their word. Shipping without ethics can create a “nightmare”.  A gallic shrug to end the presentation. IMIF Chairman Jim Davis took up the theme. Short-termism was always a problem – independents have to take the long view when the world is purely short-term. He commented on the lack of many joint-stock companies in London now.

One of the IMIF members, a financial advisor on raising funds, commented that at the earlier IMIF luncheons there was always a good sprinkling of maritime bankers present but not now. ‘70% of ships are now funded by 12 banks and only 2 are actively lending new money to shipping. How big a problem is that to one of the most fundamental industries in the world?’ Philippe Louis-Dreyfus replied that in a year’s time it would be a problem. ‘All those owners who did such nice transactions in 2004/5/6 and 7 are not now able to refinance those balloons as they did before’ the financial advisor added. Jim Davis commented that if the industry was profitable it would not be a problem and commented that he had been complaining for years that shipping is not properly rewarded.

One of the shipping bankers who was there commented that shipping is going to have to rely on equity much more than in the past but he thought that this was actually a good thing. The alternative is to find partnership capital, he said – there is a lot of money out there looking for the right partnership owners. Shipping has to focus – not only on banks but on partnership capital. I know there is money available! Other very senior and well-known shipping personalities added their own opinions on the situation to the debate in the Lloyd’s Register General Committee Room that lunchtime before the session ended. To learn more I think you will have to decide to become a member of IMIF but I have given you what I hope is at least a tempting taste of an IMIF luncheon.