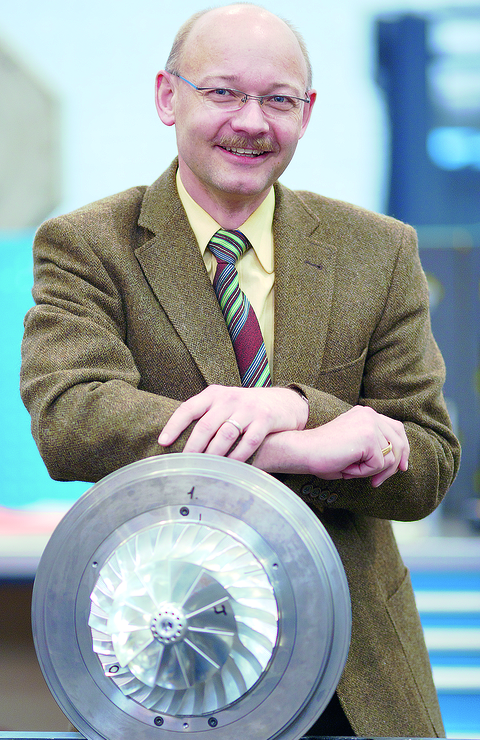 Over a period of almost 40 years, ABB Turbocharging can claim always to have met developments in the Chinese market for large turbochargers with an appropriate local response. At the Marintec 2011 marine trade show in Shanghai, the company announced its latest move: the start of production in China of its most modern high pressure single stage turbocharger for low speed 2-stroke engines, the A100-L.
In detail, ABB Turbocharging’s involvement in the Chinese market started in December 1978 with the conclusion of a license agreement with the organization that subsequently became its joint venture partner, Chongqing Jiangjin Turbo & Charger Machinery Co., Ltd, a subsidiary of the China Shipbuilding Industry Corporation. In parallel, on the after-sales side a service network was installed, mainly for turbochargers on the ships of Chinese owners.
The ABB Jiangjin Turbo Systems Co., Ltd, joint venture was forged in 2006 and, as the next logical step, 2009 saw the opening of the state-of-the-art turbocharger factory in Jiangjin, close to the previous place of manufacture.

Driving force
“The driving force behind this progressively increasing commitment has been our strategy of always providing Chinese engine builders and end users full access to the new products and service offerings they need, ” notes Oliver Riemenschneider, head of the global ABB Turbocharging Business Unit. “To get this right, we have to fully connect with the engine builders of China, supporting their development efforts with our local team of application engineers, dedicated to the Chinese market and constantly in contact with it.”
The feedback gathered from these contacts and extensive market research pointed in the same direction: the time had come to localize the A100 turbocharger generation. “This is triggered by the expansion of licensed production of 2-strokes as a result of China’s intention to be the global number one in shipbuilding, ” Riemenschneider asserts. “Works are being built or expanded to produce every size of low speed engine. This sector of the engine industry in China now needs proven enablers of IMO Tier II NOx compliance at high fuel efficiency. Thus, our offering for 2-stroke engines from the Chinese works starts with our most modern A100-L turbocharger generation rather than its TPL-B predecessor, which is also still produced in high numbers.”

Multiple milestones
With so much going on so rapidly in the 2-stroke engine market, it is not surprising that the first A100-L turbocharger to leave the Jiangjin factory will set more than one milestone. “It is an example of the A165-L, the smallest A100-L model, and will be fitted to one of the first examples of a new, small bore 2-stroke engine to be produced at the brand new factory of a brand new player in the 2-stroke engine market, ” Riemenschneider states. “I am talking about a 6 cylinder model of Wärtsilä’s new 35 cm bore RT-flex35, from a series being built by Yuchai Marine Power Co. at its recently completed factory in Doumen, in the southwest of China.”
The engines will be used in a series of 20, 000 DWT bulk carriers being built at a shipyard in Fujian province. Both the end user and the engine builder confirm that an A100-L turbocharger was specified both for its proven record of enabling optimized fuel consumption and IMO Tier II emissions and because of its excellent reputation for reliability and availability. “These benefits make it an ideal choice for a brand new engine builder establishing not only its own reputation, but the reputation of a new engine type, ” Riemenschneider says.

A100-L
The basis of the A100-L’s all round performance is advanced designs of turbines and compressors. “During its final development stages an A190-L turbocharger for low speed 2-stroke engines set a new efficiency record for an ABB turbocharger of well over 75%, ” Riemenschneider states. “Significantly, the record was achieved at a higher pressure ratio than the previous best – the A100-L is capable of producing pressure ratios in the range 4.7 to 5.1.”
This combination of high pressure ratios and high efficiency enables manufacturers of low speed 2-stroke diesel engines to significantly reduce the effects of the co-called “NOx-SFC trade-off”. This is principally achieved by transferring the work of compressing the combustion air from the piston to the turbocharger, so that more useful power is available at the crankshaft. “In daily commercial operation, fuel savings as high as 2 g /kWh are being achieved aboard a wide range of vessel types. For a 50 MW rated low-speed engine burning heavy fuel oil (HFO), and assuming a fuel price of 500 USD per ton, this amounts to savings of USD 300, 000 over a typical 6000 hour operating year, ” Riemenschneider explains. “These A100-L benefits are well appreciated in the market place and have even prompted builders of low speed 2-stroke engines to offer special high fuel efficiency, IMO Tier II NOx emissions compliant versions of their products.”
Based on an essentially uncomplicated design, A100-L turbochargers have also already proven their reliability and availability. They are inherently maintenance friendly, both in terms of their method of construction and their long times between inspection, maintenance and overhaul. 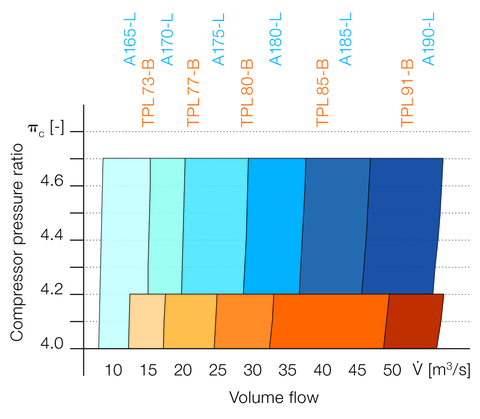 China portfolio
Local production of the A100-L means the Jiangjin factory now manufactures modern turbochargers for both 2-stroke and 4-stroke engines and this is significant. While growth in shipbuilding is currently the major contributor, China is set to become the most important market for large engines in the world overall.
“The diversification we will see in the demand for turbochargers will set the pattern for the future and is mirrored in the unique combination of ownership and design bases we need to supply in China, ” Riemenschneider continues. “These comprise licensees like Yuchai Marine Power Co.; local Chinese engine builders; joint venture companies bringing together local producers and western manufacturers; and implants by the leading international engine builders. There will be big demands on engine system and component suppliers like us to cover whole ranges of, predominantly, four stroke applications. We will need to be very responsive and to offer the right products. We will adapt our investments around our core values of providing turbochargers which offer market leading fuel efficiency, reliability and safety of equipment.”

Looking at specific 4-stroke growth sectors, considerable demand is forecast for the coastal and inland waterways vessels which play such a big part in China’s transport infrastructure. “As in several sectors in China, renewal of engines and engine technology will be strongly dependent on the introduction of emissions legislation, ” Riemenschneider predicts. “Judging by the preparations we are seeing, this will certainly happen and low emissions engines with acceptable fuel consumption will require the latest turbocharging technology.
In fact, there is even the possibility of the Chinese engine industry doing a double step on engines powering inland and coastal ships, straight from older diesels to the latest gas and dual fuel engine technology, given that new reserves of gas have been found in China and a supply infrastructure is being installed.”

Local Content
With the ABB Jiangjin Turbo Systems Co., Ltd factory and six service stations fully integrated into a global network of over 100, ABB Turbocharging is ready to supply increasing numbers of turbochargers and service them. “Expanding and diversifying local production as the Chinese market develops will certainly mean looking closely local sourcing, ” Riemenschneider notes. “Our starting point is that less than 20% of the turbochargers we sell in China are imported. We intend to continue in this way. We are already investing in our local suppliers to make sure they can achieve the quality and level of on-time delivery we will need to meet the short lead times that go hand-in-hand with a varying production schedule.”

About ABB Turbo Systems Ltd:
ABB Turbocharging is the world leader in turbocharging diesel and gas engines with outputs from 500 kW to well over 80 MW. Over 200, 000 ABB turbochargers are in operation worldwide, on ships, in power plants, on locomotives and in large off-highway vehicles.
With more than 100 Service Stations in more than 50 countries across the globe, the company guarantees fast, high quality service whenever and wherever it is needed.
Production, R&D and sales and marketing are based at headquarters in Baden, Switzerland, where the global Service Center is also located.