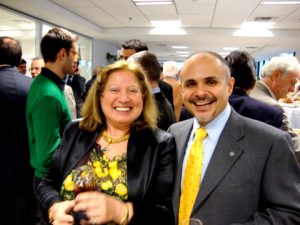 General Manager for Africa, Greece and Middle EastRINA’s Christmas do was more than a success; Elena Kritikou writes:

Following the mood of Christmas, RINA Hellas –one of the most respected classification societies- celebrated the end of the year 2011 (which coincides with its 150th anniversary) by organizing a glamorous event at its brand-new office in Piraeus.

The rainy afternoon of the 19th of December found all guests gathered at the sixth floor of a newly-built office block in the heart of Piraeus. This building accommodates the society’s team since August 2011 with a breathtaking view of the greatest Greek port of Piraeus, clearly applauds the reasons for moving from the previous location. More than 100 guests attended the event, amongst them shipowners, insurance brokers, claims specialists, shipmanagers, educational and training experts – we spotted Professor John Proussalides from the NTUA who is very active in the field of technical research and innovation. RINA contributes financially to promising projects and supports every new attempt. There were also many guests from the maritime technical front, including ofcource all RINA’s Piraeus personnel. The gentle host of the event was Spyros Zolotas, country manager for Greece and Cyprus, responsible for the technical management of the Society and its network of surveyors in the area. Spyros Zolotas kindly welcomed all guests and presented an abundance of delicious dips and drinks to delight and thank them for their presence.
Also present was Stefano Bertilone RINA General Manager for Africa, Greece, and the Middle East.

The really impressive thing is the fact that almost all RINA’s employees are under forty years old –this is the company’s strategy- and that made the event very “fresh and vivid”.
It would be negligent not to mention the great donation that RINA makes for 2011, to the Greek non- profit organization “Arc of the World”.

Exmar’s payment agreement with LLOG for the sale of the OPTI-EX.