THE INCIDENT:
Four tons of fish were flung free from bins inside a fishing vessel’s hold, causing a 70 degree list to starboard in breaking waves. The fishing vessel with three crew and one passenger had been sheltering in a bay after a day’s fishing with about ten tons of fish on board. A storm warning had predicted 50 knot winds and a five metre swell. The bay was the only sheltered area for some distance, and four other vessels had anchored there for the night. The skipper retired to bed in the early evening, leaving the radar, GPS and VHF radios on, and the two crew took turns at anchor watch during the evening. The wind peaked at about 10 pm. By midnight it had died away and the skipper was back in the wheelhouse. The dropping wind allowed the prevailing swells to bend around a rocky outcrop and break into the bay. 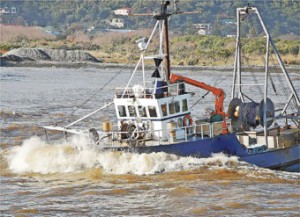 The fishing vessel needed repairs after a stormy night

As the sheltering vessel began to be hit by these breaking waves, the skipper started the main engine, just in case it was needed. All the while the vessel was taking waves on its port side. Eventually this heeled the vessel so much that about four tons of its fish cargo was flung across the hold, creating a severe list to starboard. Sea water now started to enter the starboard fuel tank vent, and a cabin window, which were both almost two metres above the deck.

During the early hours of the morning, the skipper decided the vessel was safer out of the bay, even while listing. The other vessels in the area were also preparing to leave. As the vessel was clearing the reefs at the entrance to the bay, the main engine failed, probably because of water-fouled fuel from the tanks, or a lack of oil reading from the engine sensors.
The crew dropped anchor and abandoned ship into the life raft. They were immediately rescued by one of the other departing vessels. Later that day the crew returned to the vessel and found it riding at anchor, still with a large list. It was towed to a larger bay for temporary repairs, and then steamed back to port. 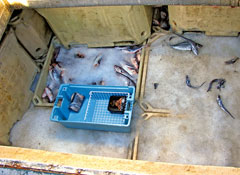 When the fishing vessel listed in the storm, around four tonnes of fish was flung across the hold

OBSERVATIONS:
 The vessel’s system for storing fish in the hold was to use large plastic boxes (dolavs) about 1.2 metres by 1 metre, which fit snugly on top of each other
 This is a suitable system for normal operating conditions, but it is worth noting what happens when cargo stored like this is subjected to extreme angles. Consider partitioning and securing bins in some way.

THE ABOVE CASE STUDY HAS BEEN TAKEN FROM MARITIME NEW ZEALAND’S ‘LOOKOUT’ ISSUE 23.-

Maersk Line, Limited brings the first of two Project Cargo ships under the US Flag

Alert! – Spotlight on the Surveyors