All things Eastern and Oriental: this was the theme for the annual lunch of the Russian Club, which unites London marine and other insurance practitioners and legal and maritime service providers who have a common interest in the Russian and CIS markets. On January 6 2012, the Russian Orthodox Christmas Eve, a total of 37 members of the club dressed variously as sultans, sheikhs, veiled ladies, Uzbeks and Kazakhs for the gathering, at Maroush V, a Lebanese restaurant in Vere Street, London W1 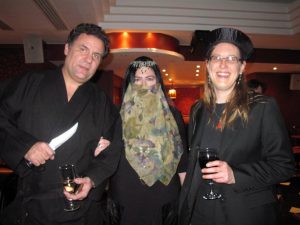 This was the 12th such event since the club was launched in 1995, and the festivities included poetry readings from the Rubaiyyat of Omar Khayyam, a quiz, songs, and a charity auction, which raised  £1, 800 for Friends of the Belarusian Children’s Hospice (UK), which provides palliate care for young people described as suffering from the aftermath of the Chernobyl nuclear explosion. Among items auctioned were paintings by Alexander Borissov  of the Ludwig Institute for Cancer Research which had previously been on display at the club’s habitual monthly venue, the Emperor pub on Vine Street.

Congratulations were offered to organisers of the event: the club’s honorary secretary Vasilina Bindley, John Metcalfe of RFIB and Irina Ford of Generali, who had strong support from Katerina and George Grishin, and Samson Akande, all of Oakeshott Insurance Consultants. 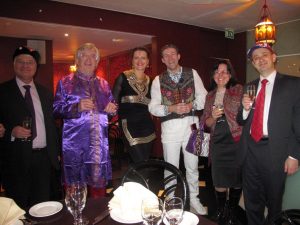 Now we challenge readers of allaboutshipping.co.uk with these quiz questions from the event:
Which Middle Eastern Empire created its own language for governmental use?
Which is the most expensive spice?
Which animal traditionally brings gifts to children in Syria?.
Which Arabic word for a number gave the Russian language the common word for all numbers?
How long did it take to build the Great Wall of China?
Answers in order: the Ottoman Empire, saffron (made from crocus), a camel, cifra or zero, and 1, 900 years.

The Propeller Club, Port of Piraeus is hosting...