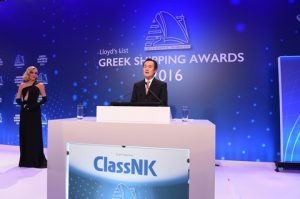 – Thenamaris, Samos Steamship, National Bank of Greece and Helmepa Junior among those honoured –

A NEW RECORD attendance and a host of celebrities contributed to the success of the Lloyd’s List Greek Shipping Awards for 2016, which were presented at a packed dinner event on Friday, December 2 at the Athenaeum InterContinental Hotel in Athens. 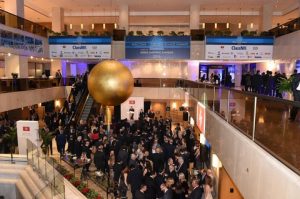 Nearly 1,200 of Greece’s leading shipping personalities, executives and their guests were present to see some of the Greek shipping industry’s best-known personalities and companies recognised. 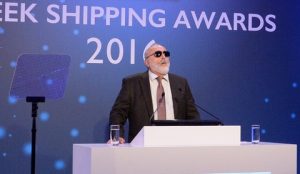 Hellenic Chamber of Shipping President, George Pateras, presented a donation on behalf of the event organisers to ‘Argo’, the charity supporting children with special needs in the families of Greek seafarers.

The awards are held annually to recognise and reward achievement and meritorious activity in the Greek shipping industry as well as to promote Greece’s status as a maritime centre.

Winners are chosen by an independent panel of judges representing a broad cross-section of the Greek shipping industry. 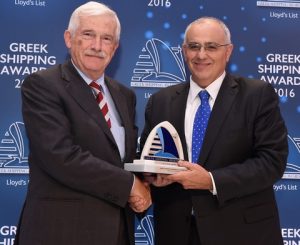 Panos Laskaridis was named 2016 Greek Shipping Personality of the Year. Mr Laskaridis for a landmark year that advanced Laskaridis Shipping Company’s diversification from its reefer business into becoming a leading dry bulk owner. Other new moves included investment in a new dry bulk terminal in Uruguay. Additionally, Mr Laskaridis has been earmarked as next President of ECSA – the European Community Shipowners’ Associations – a key position to represent Greek shipping’s concerns.

Lloyd’s List’s Greek Shipping Newsmaker of the Year Award went to Polys Hajioannou, chief executive of US-listed Safe Bulkers, for “playing good defence” and by being transparently fair to shareholders. Regular deals with lenders in 2016 strengthened the position of Safe Bulkers.

Mr Hajiannou has also been creative in finding new funds without diluting the company’s shareholders. Steps included himself purchasing two newbuildings on terms that favoured his public investors. The Award is decided by the editorial staff of Lloyd’s List.

Nicos D. Efthymiou was awarded the Lloyd’s List / Propeller Club Lifetime Achievement Award for an outstanding careerthat included serving as President of the Union of Greek Shipowners from 2003-2009.

He has long been a champion of the Greek flag, Greek seafarers and development of Piraeus into an international business centre. 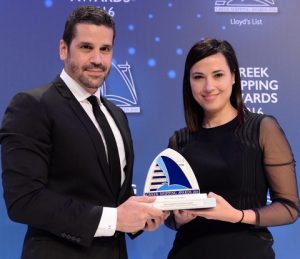 Stavroula Betsakou won the New Generation Shipping Award, open to personalities of no more than 40 years of age. A graduate of the University of Piraeus, Ms Betsakou is head of Tanker Research for Howe Robinson, leading a team of four analysts operating from London and Singapore.

She has performed more than 220 tanker market presentations in 21 cities and is frequently hailed as one of the industry’s most exciting young talents. 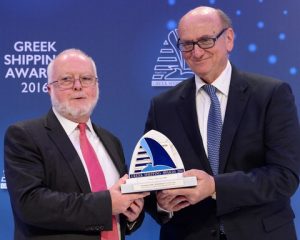 Peter Hinchliffe was elected International Personality of the Year, the only award open exclusively to non-Greeks. Mr Hinchliffe joined the International Chamber of Shipping in 2001 after 27 years with the Royal Navy. Since 2010 he has been Secretary General of the ICS, and a stalwart supporter of the industry in all fora. 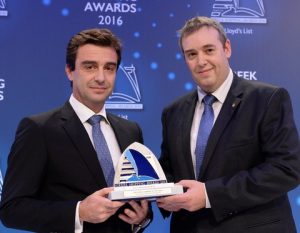 The recipient of the Dry Cargo Company of the Year Award for 2016 was Samos Steamship Co, a company with a 140-year history that has this year expanded with several bulker acquisitions, including the purchase of its largest-ever dry cargo vessel, a Very Large Ore Carrier.

As Tanker Company of the Year the panel chose one of the industry’s most celebrated names – Thenamaris, long recognised as one of the most advanced tanker companies worldwide in its systems, planning and treatment of employees.

The Thenamaris fleet now stands at about 60 tankers including 10 on order, and the company has been building a presence in new sectors such as LNG and LPG. 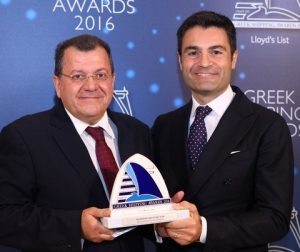 The judges chose Minoan Lines as Passenger Line of the Year for a variety of reasons: the quality of its ships and services, its increasing investment in Hellenic Seaways, the leading domestic ferry operator, and its impressive results as it emerges from the crisis plaguing the sector.

It has steadily supported numerous charities in Crete and in Greece.

Carriers Chartering Corporation won the Shipbroker of the Year Award, its second victory in this category.  Shipowners that nominated Carriers testified to its close relationships with first-class charterers, its market expertise and support, and its ethical approach to its profession. 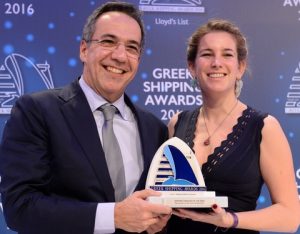 The Shipping Financier of the Year Award went to National Bank of Greece. NBG has been in shipping finance for a century and from the mid-1990s, led by the late Alexandros Tourkolias, it expanded as a major lender. Today NBG maintains a $2.5bn portfolio of loans to Greek owners.

Despite difficult conditions the bank has been selectively lending to stand by its existing clients. In 2016 it also launched a new tool providing trade finance and advice to support Greek maritime manufacturing exports. 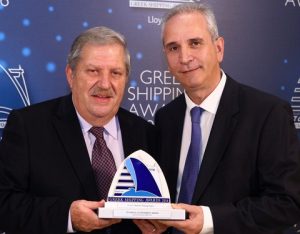 Vassilis Papageorgiou, Vice Chairman of the Tsakos Group, won the Technical Achievement Award. He spent 23 years with Lloyd’s Register, rising higher than any other Greek surveyor before him.

For Tsakos, he has overseen 70 newbuildings of diverse types in various countries and has stood out for his contribution to making shipping a stronger, safety-focused industry. 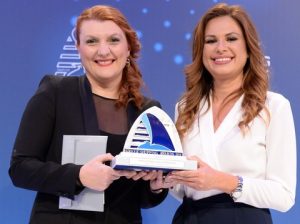 HEMEXPO was recipient of this year’s prestigious Piraeus International Centre Award. HEMEXPO – the Hellenic Marine Equipment Manufacturers and Exporters – was established in 2014 to promote Greek-made equipment on ships constructed overseas. It has already succeeded, with the support of a few of the country’s leading shipowners, in penetrating markets that previously were unaware of Greek manufacturing companies.

Helmepa Junior won the Award for Safety or Environmental Protection Congratulations to Helmepa Junior. Over the last year, members of the programme carried out a record 3,900 activities throughout Greece with the aim of helping the environment and raising awareness.

The Seafarer of the Year Award was won by Capt Diamantis Papageorgiou. Captain Papageorgiou has served as Master of more than 50 different ferries in Greece’s coastal services and is known for being entrusted with the most difficult routes. 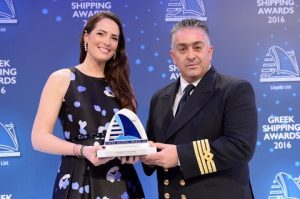 Difficult to replace, in his 16 years as a Captain he has taken a total of only one-and-a-half months’ leave. Currently, he is Master of the ‘Nissos Rodos’ for Hellenic Seaways and typifies the company’s commitment to provide a service to the islands under often difficult conditions.

The Eugenides Foundation was winner of the 2016 Education or Training Award. Its wide-ranging and consistent support for marine education over the years has included publishing 134 books, offering of scholarships, and donating simulators and other equipment to the state schools.

The Foundation recently spent more than 700,000 Euros to repair and refurbish the Merchant Marine Academy of the Ionian Islands in Cephalonia after the earthquake damage of 2014. 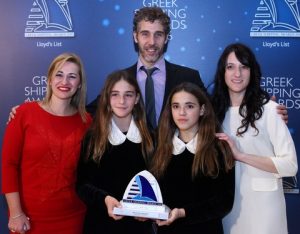 The Ship of the Year Award went to the brand-new LNG carrier Maria Energy of Tsakos Energy Navigation. The Maria Energy was delivered in October 2016 from Hyundai Heavy Industries and was the Tsakos newbuilding department’s 100th newbuilding.

The 174,000 cubic metre vessel is the company’s second LNG carrier and the company’s first with tri-fuel diesel electric propulsion.

The Lloyd’s List Intelligence Big Data Award was presented to Moore Stephens for its unique ship operating costs benchmarking tool, ‘OpCost’. Greek-owned ships are the biggest contributor to the OpCost database and the tool is keenly used by Greek owners, especially in poor markets that require even stricter cost controls.

The winner was chosen by LLI. 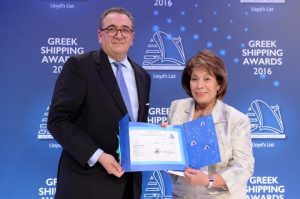 Achievement in Safety or Environmental Protection 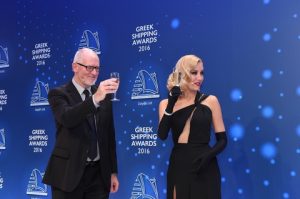 Achievement in Education or Training 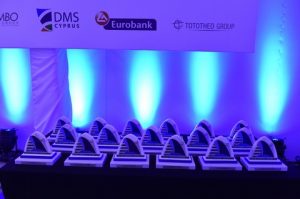 Greek Shipping Newsmaker of the Year 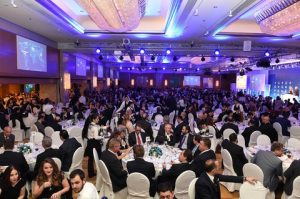