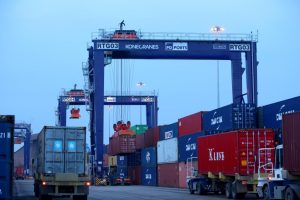 PD Ports has taken the next step in its programme to almost double its container handling capacity at Teesport, with the completion of the ground works in January.

The works, which began in January 2011, involved the complete reconstruction of more than five hectares of the container terminal area with heavy duty paving designed to withstand the increased loads from the container stacks and the four new rubber tyre gantry cranes (RTGs).

PD Ports has invested over £16 million as part of an overall £29 million project, which will expand the container terminal capacity from 235, 000 to 450, 000 TEU (Twenty Foot Equivalent Unit) and position Teesport as the second largest container port in the north of the UK. “We are very pleased with the progress so far, ” says David Robinson, chief executive, PD Ports Group. “Operator training on the new RTGs was completed ahead of schedule and the cranes are already in full service at the terminal.

We are also well advanced in testing and implementing a new terminal operating system, which remains on schedule to be operational this summer.” The RTG cranes represent the single biggest equipment investment at Teesport since the container terminal opened in 2003. Teesport is also launching a fast gate service in April, to reduce waiting times for containers moved from ship to warehouse, to further improve service to onsite customers including ASDA and Tesco.

PD Ports continues to see container volumes rise despite the global economic downturn and believes its promotion of the portcentric concept has contributed significantly to its success.  The concept involves establishing distribution centres and importing goods through ports closer to the final customer. Unpacking, storing and picking goods at the port for onward delivery to stores directly benefits the supply chain at multiple levels. By eliminating road miles travelled from southern ports to distribution centres often based in the Midlands and the North, the environmental footprint and fuel consumption of the entire supply chain is reduced.

The recent announcement that Clipper Logistics Group will open a purpose built distribution centre within the port hinterland will further support PD Ports’ portcentric operations and will drive increasing volumes as the facility opens in autumn 2012.

The 3 business interests of PD Ports are:

Port Operations– is split into two business streams – bulks and unitised and includes:

Development plans for port operations include:

In 2006 ASDA WalMart opened a 360, 000 sq ft import centre at Teesport and has saved more than 8 million road miles by adopting the portcentric concept.  Adjacent to the ASDA facility, Tesco operates a purpose built 1.2 million sq ft import centre at Teesport, which opened in 2009. Tea and coffee specialists Taylors of Harrogate opened a purpose built warehouse facility at TeesportCommerce Park on the periphery of Teesport in 2010 to handle its UK imports.

Management of river traffic for the ports of Tees and Hartlepool, ensuring safe navigation and maintaining the required channel depth.