Mysteries of the markets: some shares at odds with commodities, others contrary with freight rates – 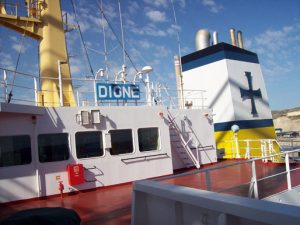 Dione, one of the panamax bulkers in the Diana Shipping Inc fleet

– Mysteries of the markets: some shares at odds with commodities, others contrary with freight rates, By James Brewer –

Gold! The precious metal is in fevered demand, and the commodity price is at record levels of around $1, 777 an ounce. Conversely, shares of many gold explorers are grossly undervalued.

Shipping! The Baltic Dry Index which measures the price of moving raw materials by sea has been at its lowest level for a quarter of a century; perversely, demand for the commodities they carry including some basic minerals has sent graphs soaring, and shipping stocks themselves are looking fairly healthy in comparison to the lows of the past 12 months.

Both are mysteries of the markets, which seem to revel in disconnects. Surely, for instance, when the revenues of ship owners are squeezed, investors run sea miles away from the shares

One explanation for the paradox in the maritime scene has been advanced by “value investor” Frank Voisin who writes in Value Walk, an online news site “with emphasis on value investing, hedge funds and asset managers.”

Falling revenues tends to spook the market, says Hong Kong-based Mr Voisin, especially for an industry that has high fixed costs, but the stocks of two of his portfolio holdings, New York-listed Diana Shipping and Genco Shipping & Trading “have been on fire” (in the positive sense of the expression).

It could be that the Baltic Dry Index bottoming out prompted an exit by fundamental short sellers, as further downside might be limited. In exiting a short, you have to buy shares in the open market to cover your position, leading to upward pricing pressure. In the case of Diana Shipping, another reason for its recent good performance might be that it has signed several fixed rate contracts which should limit its exposure to further erosion in the BDI.

Now, this might be a good time to remind our readers that pricing of two of the world’s key commodities, oil and gold, shows signs of remaining pretty sparky, too. The political furore around oil, and the lack of fresh sources other than from regions of steep political or climatic risk, is well documented.

Investors would do well to keep an eye on the many and varied small companies digging new resources. One of the junior companies recently briefing stockbrokers in London and other financial centres was Toronto-listed Treasury Metals, a gold exploration and development company focused on its 100% owned Goliath Gold Project.

Referring to exploration endeavours by some others in the sector, Treasury Metals president and chief executive Martin Walter says of his property: “We are not in Alaska, not in the Yukon, we are just 2km from the TransCanada Highway that runs from Vancouver to Halifax.” In fact, the deposit is only 20km from the small city of Dryden, in northwestern Ontario, so infrastructure is excellent near what has been estimated as a 1.7m ounce resource, which further drilling could lift to 2m ounces. Mr Walter and his colleagues hope to advance to a feasibility study, leading potentially to production in early 2015. “With gold at $1, 700, there is a real business here, ” says Mr Walter, whose debt-free company has royalty income from a gold mine in northern Mexico.