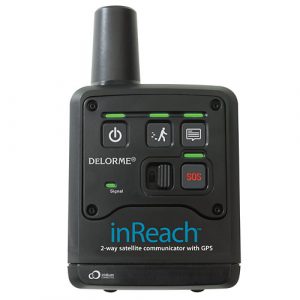 YARMOUTH, Maine — (March 6, 2012) – The DeLorme inReach 2-way satellite communicator has been honored with a 2012 Backpacker magazine Editors’ Choice Award. This is the most prestigious award in the outdoor industry, given annually in recognition of outstanding innovation in design, materials, and performance.

inReach is one of only 13 products to be so honored for 2012. The Backpacker Editors’ Choice Awards, bestowed each year since 1993, recognize the products that Backpacker editors have chosen as the best of the year based on months of trail testing by teams of highly experienced hikers and climbers. With no set categories for the awards and no set number of recipients, the products and the testing process drive the award categories.

“No other magazine or website conducts in-depth field-testing as vigorously or impartially as the crew led by Gear Editor Kristin Hostetter, ” said Editor-in-Chief Jonathan Dorn. “The results are reviews that lead consumers to smart, durable products that consistently prove their worth with years of best-in-class performance.”

With 90 percent of the Earth’s surface lacking cell phone service, inReach is a full-featured communication alternative for remote or high-risk environments. It is the first consumer-affordable satellite communicator with two-way SOS and personal text messaging, delivery confirmation, “follow me” online GPS tracking, and worldwide coverage via Iridium, the world’s furthest-reaching satellite network. It can serve as a standalone device or be paired with an Android smartphone or DeLorme Earthmate PN-60w GPS for send-and-receive messaging.

In its product review, Backpacker called inReach a “game changer.” “The two-way text messaging enabled me to maintain a running dialogue with friends and family, ” said Dorn, who had first-hand experience with inReach during recent trips to the Andes and Tetons.

Gear Editor Kristin Hostetter described how inReach helped her stay connected while doing field testing. “My kids’ classes followed my progress in Chile and fired me questions.” Keeping friends and families updated is one of inReach’s key attributes.

inReach communication and tracking capabilities, coupled with the ability to describe an SOS situation and exchange updates with responders, make inReach a must-have for anyone who spends time in the outdoors beyond cell phone range.

“We are delighted to be honored for innovation by such an esteemed publication, ” said Jim Skillings, DeLorme Vice President for Commercial Products. “This award is a further validation of how important this product is to outdoor enthusiasts.”

inReach is available at a suggested retail price of $249.95. For more information or to find a retailer, go to www.delorme.com.

About DeLorme: DeLorme is a longtime leader in innovative mapping and GPS products, and most recently the company has earned numerous prestigious awards for its groundbreaking integration of GPS navigation and satellite communications. The ability to develop all the critical components necessary to compete in these fast-changing technologies distinguishes DeLorme as a provider of unique solutions for both the commercial and government markets. DeLorme is based in Yarmouth, ME, U.S.A., and is home to Eartha, the world’s largest revolving globe. To learn more, visit www.delorme.com.

About Backpacker: Backpacker (www.backpacker.com) brings the outdoors straight to the reader’s doorstep, inspiring and enabling them to go more places and enjoy nature more often. The authority on active adventure, Backpacker is the world’s first GPS-enabled magazine and website, and the only outdoor media whose editors personally test the hiking trails, camping gear, and survival tips they publish. Backpacker‘s Editors’ Choice Awards, an industry honor recognizing design, feature, and product innovation, has become the gold standard against which all other outdoor-industry awards are measured. And the magazine recently launched mobile media applications that allow users to text-message hiking maps and directions to their phones. In the last four years, Backpacker has won five National Magazine Awards, the publishing industry’s highest honor. In 2008, the magazine won the NMA for General Excellence, joining The New Yorker, Mother Jones, GQ, and National Geographic as top winners in their respective size categories. In 2009, it won three awards, including General Excellence Online. Backpacker has also won numerous other print, design, and digital awards, and its writers have been recognized in prestigious contests and best-of-the-year anthologies