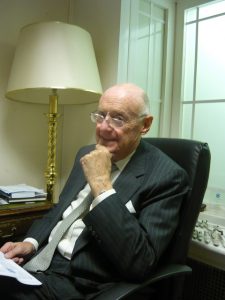 – The Chairman of the International Maritime Industries Forum (IMIF)* Jim Davis CBE K(DK)**, once again shares his thoughts on  the ever Changing World, and how important is for all in our industry to face the harsh reality:

The future for the Euro is in my belief bleak.  Already the “One Size Fits All” imposition of the currency is proving impossible to maintain.  Undoubtedly Germany will continue for a period to bail out the most distressed nations but this is not a credible long-term panacea, it is more, to me, a political desire towards a federal Europe rather than Economic.  Talks of Anarchy and chaos if the distressed nations are not “saved” are alarming but their problem is unlikely to go away and would be better faced up today rather than later after a series of transfusions of Billions of dollars which inevitably prove ineffective and wasted.

Meanwhile the direct affect of the Euro on shipping is hard to define with precision.  Happily shipping has remained a dollar – based industry except for occasional shipbuilding deals in local currencies. Much equipment for New-builds comes from Europe but there again the contracts are generally quoted in Dollars.

The shift to the Far East of most aspects in the World Economy is apparently irreversible but, for stability, all those engaged in shipping have been reluctant to trade in the Euro. Thus the short/medium term future of the Dollar will be upward in value, and there will be an inflationary trend in Europe for its imports while the U.S. will have a comfortable time. As we all observe the Global Economy is in very rough terms a mass movement of basic materials. Ore, oil, coal and food (rice mainly) towards the Far East and manufactured products moving in containers in the reverse direction towards Europe and North America. Shipbuilding is largely disappearing in Europe, other than for high Tech vessels such as Cruise Liners, ferries, warships, survey ships etc and, after its years of dominance by Japan and Korea is developing apace in China.

It is interesting to consider the future of Seafaring within the shifting Global Economy. In the 30’s I was inspired as a boy by the fact that over 40% of seaborne trade was carried in British Flag ships, the good old “Red Duster”. How different it is today!  Crews are coming less and less from traditional seafaring nations and instead from former “Iron Curtain” countries.  I personally recently sailed in a UK based cruise vessel where the Captain was Romanian and with the exception of the Staff Captain, all the other officers, Deck, Engine and Catering were from former communist countries.  The seamen, Engineers and hotel staff were all predictably from the Far East (i.e. Philippines).

Apart from Passenger Ships, the life of a seafarer is totally different nowadays with the two destructive characteristics of very small crews (i.e. little camaraderie …. just watch on/watch off) and minuscule time in port no longer enabling the once popular “Run Ashore”.

Furthermore seafaring no longer has the romantic image, due to the fact that in the developed countries there exist cheap airfares and holidays, so that the ability to “see the World” is now possible for a majority of citizens and is no longer the province of the Seafarers.

All I have written may appear very dreary.  Really it is an attempt briefly to face up to reality.

On the very positive side remains the fact that over 90% of world trade is conveyed by sea and it is the job of the present generation fully to recognise and re-publicise this fact and thus to encourage present generations once again to embrace the challenge of being a seafarer which profession, despite disadvantages referred to above, still provides one of the most self-fulfilling occupations around.

*IMIF is a unique organisation comprising of high profile representatives from quite literary all parts of the maritime industries. These include shipowners, shipbuilders, ship recyclers, shipmanagers, shipbrokers, insurers, underwriters, P&I Clubs, classification societies, , regulators, maritime layers, shipping accountants, shipping bankers and financiers, surveyors, salvage experts, trade unions and a host of ancillary organisations that share IMIF’s commitment to the promotion and economic well-being of the maritime industries. As a forum IMIF led the way and indeed leads the way in discussing and debating any subject of relevance to the well-being of the maritime industries. For nearly fifteen years members have hosted a series of buffet luncheons for the benefit of the other members to which gust speakers renowned for their expertise have been invited to talk on a variety of subjects.

** Jim Davis has been actively involved in many areas of the International Maritime Industries  for a period that now expands over fifty-five years! His career has included being a Director of P&O Lines, Director of Shipping with Kleinwort Benson Merchant Bankers and various Chairmanships such as DFDS Limited, Midway Shipping and Wigham Richardson shipbrokers. Directorships have included Pearl Cruises of Scandinavia, Rodskog Shipbrokers of Hong-Kong and Global Ocean Carriers, part of Tsakos Group.

Sovereigns to test the long end of the...