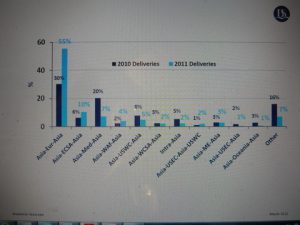 Over the past two years 2.6m teu of fully cellular newbuilding capacity has been delivered.

The vast majority of these newbuildings joined main line Asia – Northern Europe and Asia – Mediterranean trades. During the years 2010 and 2011, Braemar Seascope estimates that in the region of 1.5m teu, accounting for more than half of all newbuilding capacity entering service, was initially deployed on those east-west trade lanes.

During 2011, 59 post panamax containerships, with an average capacity of 11, 500 teu, entered Asia-Europe services, adding 680, 000 teu of fresh capacity.  Additionally, 15 containerships of an average 8, 400 teu were delivered and deployed on Asia – Mediterranean and a developing Asia – Middle East trade lane, adding more than 125, 000 teu of new capacity.

A trade lane of noticeable deployment growth over the past two years is the Asia- East Coast South America route, which recorded approximately 40 newbuildings enter service, including some comparatively high reefer capacity vessels exceeding  7, 000 teu nominal capacity which were introduced by Maersk Line and Hamburg Sued.  In 2011, this emerging Latin American container route accounted for more than 10% of all new capacity commissioned.

Jonathan Roach, Senior Container Analyst at Braemar Seascope, said: “For the next three years going forward we expect another four million teu to hit the water, which includes approximately 150 containerships with a nominal capacity of 10, 000 teu or more.”

Intermanager President: “Not paying ransoms would be massively detrimental to the industry” –