Damage to world’s oceans could hit US$2 trillion a year, experts say 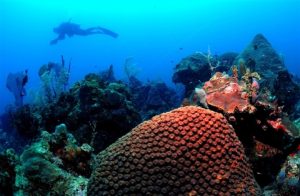 A diver notes marine species in the Dry Tortugas National Park in Florida.

A new study recommends that the United Nations appoints a High Commissioner for Oceans to coordinate research and action and that there should be more preparation for a 1-2 meter (up to 6.5 feet) sea level rise by the end of the century.

The cost of damage to the world’s oceans from climate change could reach $2 trillion a year by 2100 if measures to cut greenhouse gas emissions are not stepped up, a study by marine experts said last Wednesday. The study found that without action to limit rising greenhouse gas emissions, the global average temperature could rise by 4 degrees Celsius (about 7 degrees Fahrenheit) by the end of the century causing ocean acidification, sea level rise, marine pollution, species migration and more intense tropical cyclones. It would also threaten coral reefs, disrupt fisheries and deplete fish stocks. In the study, “Valuing the Ocean, ” marine experts led by the Stockholm Environment Institute analyzed the most severe threats facing the world’s marine environment and estimated the cost of damage from global warming.

The hunt is on for world’s srongets corals

The SEI found nitrogen-rich fertilizers and waste would strip more ocean areas of oxygen, causing what is known as hypoxic dead zones, which are already found in more than 500 locations. The institute said that under a business-as-usual scenario, without radical cuts to emissions, the annual cost would hit $1.98 trillion, or 0.37 percent of global gross domestic product, by 2100. However, in a statement, the SEI added that “a rapid emission reduction pathway that limited temperatures increases to 2.2 degrees Celsius would ‘save’ (i.e. avoid) almost $1.4 trillion of those damages.”

“These figures are just part of the story, but they provide an indication of the price of the avoidable portion of future environmental damage on the ocean — in effect the distance between our hopes and our fears, ” Frank Ackerman, director of the Climate Economics Group at SEI-US, said in the statement. “The cost of inaction increases greatly with time, a factor which must be fully recognized in climate change accounting, ” he added. As sea levels rise, Kiribati eyes Fiji as new home for thousands The loss of tourism would incur the highest cost at $639 billion per year. The loss of the ocean carbon sink — the seas’ ability to soak up carbon dioxide (CO2) — would cost almost $458 billion, the study showed. Warmer water holds less carbon dioxide. Ackerman told Reuters that radical cuts to emissions would require the widespread use of radical carbon removal technologies like sucking carbon dioxide out of the atmosphere. “The faster we stop emissions rising, the lower the damage will be. But on current technology, I wouldn’t be surprised if we end up on a 4 degree C pathway, “ he said. Oceans’ acidic shift may be fastest in 300 million years The study did not put a monetary value on the loss of some species which inhabit the world’s oceans, critical processes like nutrient cycling or the loss of coastal communities’ traditional ways of life. “The challenge is to figure out what parts of the ocean environment have a value you can put a meaningful price on. There are very important areas which we still can’t incorporate into a market, “ Ackerman said. Pollution, other threats The SEI statement said that while climate change was “an enormous threat, ” there were others.

“A key point of Valuing the Ocean is that the convergence of multiple stressors — acidification, ocean warming, hypoxia, sea-level rise, pollution, and overuse of marine resources — could lead to damages far greater than just from individual threats, “ it added. Warming oceans could melt ice faster than expected The study recommended that the United Nations appoints a High Commissioner for Oceans to coordinate research and action and that there should be more preparation for a 1-2 meter (up to 6.5 feet) sea level rise by the end of the century. “We must develop an integrated view of how our actions impact the ocean, and threaten the vital services it provides, from food to tourism to storm protection, ” Kevin Noone, director of the Swedish Secretariat for Environmental Earth System Sciences at the Royal Swedish Academy of Sciences, said in the statement. Noone, a co-editor of the report, added that the global ocean was “a major contributor to national economies … yet is chronically neglected in existing economic and climate change strategies at national and global levels.”