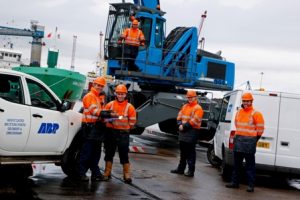 Associated British Ports (ABP) is launching a new marine apprenticeship training scheme at its Humber port of Grimsby, Immingham, Hull, and Goole.  The scheme will create exciting career opportunities for local young people interested in becoming part of the operational teams that control all the shipping movements in the UK’s busiest estuary and port complex.

The four-year programme is designed to give hands-on training as a Marine Operations Apprentice.  Successful applicants will learn about all aspects of marine operations within the Humber ports, including introductions into hydrography, conservancy, dredging, and pilotage.

Captain Martin Gough, ABP Dock Master Humber, said: “Despite the economic uncertainty ABP’s Humber ports are thriving.  The continued development of the Green Port scheme at Hull as well as the recently-announced Grimsby Riverside Terminal highlights, among others, the extensive growth opportunities on the Humber and within the ports industry, which will mean exciting career prospects for these apprentices.”

Captain Phil Cowing, ABP Harbour Master Humber and Marine Advisor to the ABP Board, said: “ABP’s biggest asset is its employees, and the skills and wealth of knowledge of our staff throughout all our operations is what makes us the UK’s leading ports group.  This new apprenticeship scheme will allow us to maintain our high standard of marine professionalism so that we can continue to provide the level of service that has made us an industry leader.”

ABP’s development of the scheme complements the group’s highly successful Graduate Trainee Programme, which has been in place for almost 40 years, as well as the ompany’s existing Group Marine Training policy – recognised by the Department for Transport in the Port Marine Safety Code Guide to Good Practice as an example of best practice

Marsh presents Lloyd’s with the original slip for RMS Carpathia