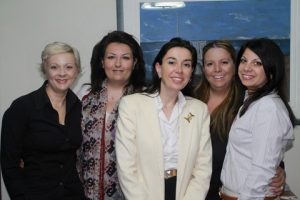 The 17th Annual General Assembly of WISTA Hellas took place on Wednesday 4th April 2012 at the Metropolitan Hotel during which General Elections were held to appoint the new Board of Directors and the new Auditing Committee for the two-year period 2012-2014.

The Association’s members were updated on WISTA Hellas’ overall activities during 2011 and in particular, were made aware of its annual financial status and the budget for 2012.  An enthusiastic exchange of views, ideas and information between members present (representing all facets of the maritime industry) ensued, relating to the future conduct and activities of the Association.

In recognition of her longstanding contributions and dedication to WISTA, Mrs. Jenny Pournara was nominated for Honorary Membership.

It is important to note that WISTA Hellas is part of a greater international body of professional women actively involved in the global industry of shipping and trade spanning across 34 countries and many of whom play key roles in the companies they represent. Such diversity of professionals within one industry is unique and has proven a major factor in promoting the goals of WISTA by encouraging commercial and educational interaction on many levels.

This year also being a Posidonia year, the new Board has already begun preparations for the much awaited Welcome Reception for WISTA members and friends worldwide attending the Exhibition and more news and details will be released imminently.