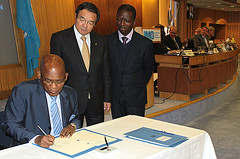 The Code of Conduct concerning the Repression of Piracy and Armed Robbery against Ships in the Western Indian Ocean and the Gulf of Aden (Djibouti Code of Conduct) was today signed on behalf of South Africa by the South African High Commissioner, His Excellency Dr.  Zola Skweyiya, who was attending an IMO Conference on Capacity Building to Counter Piracy off the Coast of Somalia.

South Africa has become the 19th State to sign the Code of Conduct, set up by IMO to develop regional capacity to counter piracy in the Gulf of Aden and Western Indian Ocean. The other signatories are: the Comoros, Djibouti, Egypt, Eritrea, Ethiopia, Jordan, Kenya, Madagascar, Maldives, Mauritius, Oman, Saudi Arabia, Seychelles, Somalia, the Sudan, the United Arab Emirates, the United Republic of Tanzania and Yemen.

Signatories to the Djibouti Code of Conduct, which has been in effect since 29 January 2009, undertake to co-operate in a variety of activities, including:

In addition, the Code provides for the sharing of related information, through the three Information Sharing Centres in Sana’a, Mombasa and Dar es Salaam which have been established under the Code.

Signatories to the Code also undertake to review their national legislation with a view to ensuring that there are laws in place to criminalize piracy and armed robbery against ships and to make adequate provision for the exercise of jurisdiction, conduct of investigations and prosecution of alleged offenders.

IMO – the International Maritime Organization – is the United Nations specialized agency with responsibility for the safety and security of shipping and the prevention of marine pollution by ships.       Web site: www.imo.org