The sea gets sick but never dies 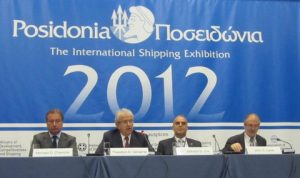 At the press conference of today in the venue of the Posidonia International Exhibition, the Union of Greek Shipowners President, Theodore Veniamis, stated the following:

Greek shipping endures and makes progress. Despite the deep financial crisis of the entire planet and especially Greece, Greek shipping remains at the top of the international league, closely connected with its national basis, with a fleet of 3, 325 vessels, a total tonnage of 227 million dwt and average age of 10, 5 years.

“You may know, ”  Veniamis stated, “that my compatriot shipowners on my island, Chios, used to say that the sea gets sick but never dies”. We fully share this belief and we try to follow their task. Of course, the overall environment has changed. The circumstances at sea are completely different today, compared to past years. Sometimes they may be better but in many cases, they are adverse and complicated, demanding faith, strength and hard effort. Globalization and its side-effects, the galloping development of marine technology, the exaggerated and not always disinterested measures at central and regional level, disturbing the smooth operation of vessels, the financial and lending illiquidity, the effects of the economic crisis on the freight market but also the scourge of piracy, are critical challenges for the shipping industry of the 21st century.

As regards the problem of piracy, in particular, the UGS President emphasized that it takes threatening dimensions day by day. The reason is the absence of the strong political will of the international community to address it in the most effective way. Recently, the Greek state upon proposal of the shipping community, adopted the necessary legislation to allow the use of certified private armed guards on board Greek flag vessels along the lines of similar legislation of other countries. However, it should be emphasized that the use of armed guards is not a panacea. It does not constitute a solution of the problem but only a supplementary measure for the protection of seafarers, vessels and cargoes.

Another issue of serious concern is the large number of technical measures imposed on shipping at international or regional level based on new environmental standards. In the context of international pressure for the reduction of green house gases from ships, unfortunately shipping has been identified as one of the potential convenient sources of revenue, but not to a degree proportional with the low level of its contribution to air pollution. It is, however, positive that the competent International Maritime Organization (IMO) was the first international organization which adopted new international Regulations for the reduction of CO2 emissions from ships, proving that it has the dynamism to continue the exclusive handling of this case.

At national level, since 2009, Greek shipping, despite the impressive foreign exchange inflow always depending on the freight market level – and the opportunity of employment offered on board ships and ashore, was deprived unjustifiably of the supportive services of its qualified administrative authority. The abolition of the Ministry of Mercantile Marine, in a country with one of the largest fleets in the world, and the detachment of the Coast Guard Corps resulted in administrative deregulation and confusion in the implementation of the proper policy for shipping operations and, in particular, for the closer ties between vessels and the national economy, which inevitably are seriously impeded.

The shipping community is always preoccupied and especially lately with the need for modernization and upgrading of the entire maritime education system in order to optimize as much as possible the evident recent turn of youngsters to the seafaring profession. The current economic and social conjuncture facilitate the success of this endeavour.

Despite the international economic crisis which is adversely hitting world seaborne trade, Greek shipowners believe that they will successfully respond to the several big challenges and that their shipping will keep its leading role in the international league of “tomorrow”.

“The above statements cover the position and progress of Greek shipping today”, Veniamis said. “Taking the opportunity of this gathering, I would also like to announce the following”:

The shipping community is prepared to intervene most effectively in order to give its due support to the hardly tried segments of our society. It has done so several times in the past, personally and collectively, with care, responsibility and also deep and disinterested human and patriotic feeling. And always without publicity.

The Union of Greek Shipowners has already at its disposal the necessary capital from contributions especially from our colleagues but also from their collaborators all over the world. We are in the process of setting up special projects, following thorough research, in order to safeguard the best possible disposal of the collected sums.

You will receive more detailed information on this endeavour shortly.”

There were about ten questions to which Veniamis not ony replied, but fully explained the position of UGS leaving no doubt or misunderstanding.