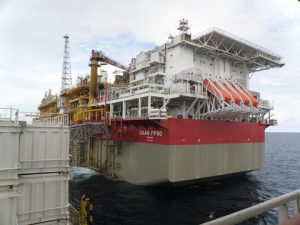 Wallingford, UK: A new environmental and marine monitoring system has been designed and commissioned by Fugro GEOS for Total’s new-build Usan FPSO.  The real-time meteorological and marine data essential for safe offshore operations are provided by sensors located on a surface Wavescan buoy together with a range of instrumentation onboard the facility.

Built at the Hyundai Heavy Industries Shipyard in South Korea, the 320-metre long Usan FPSO is a critical component in Total’s second biggest project offshore Port Harcourt, Nigeria.  Prior to its three-month voyage to the Usan oilfield, Fugro GEOS’ environmental and marine monitoring system was installed onboard in South Korea.

Paul Le Bourlay, Usan Project Telecom Engineer for SNEF – specialist installation contractor – was on site during the commissioning and was impressed by the professionalism of the Fugro GEOS team.  “I’m grateful for their support and the initiative they demonstrated on site.  This was one of the most enjoyable and instructive commissioning programmes I’ve been involved in, ” he remarked.

Fugro’s system acquires and processes data and distributes them in real-time via displays in both the radio room and the central control room onboard; it is also interfaced with the FPSO’s DCS (distributed control system).

The provision of real-time metocean (meteorological and oceanographic) data is essential for safe helicopter operations and also assures safe tanker movements, assists berthing and general offshore operations, provides vessel performance and response monitoring and improves weather forecasting.  The data provided by the system include wind, temperature, humidity, pressure, cloud, visibility, precipitation and vessel motion whilst sensors on the Wavescan buoy – located 2 kilometres from the FPSO – provide marine parameters such as waves, current profiles and sea temperature.  This real-time information is accessible from Total’s onshore base and is also to be made available to Météo-France.

“Fugro’s Wavescan buoys have been in continuous use for 20 years.  This low maintenance data collection buoy is considered to be the industry standard for the sea conditions at Usan and for the range of marine measurements necessary for safe offshore operations, ” said Steven Hamilton, Operations Manager of Fugro GEOS’ Offshore Systems Division.  “All sensors have a strong track record and we have successfully designed and installed metocean packages similar to this one on numerous FPSOs, rigs, platforms, TLPs, jack-ups and other vessels around the world.”

Connected to forty-two wells at the Usan field, about 100 kilometres offshore Port Harcourt, the FPSO was formally inaugurated in April.