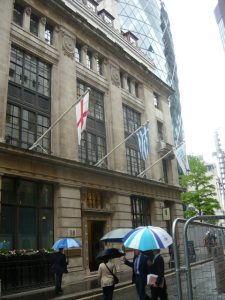 The Greek Shipping community in its entirety – shipowners and seafarers are relieved with the presidential decree vis-à-vis the re-instatement of the Ministry of Mercantile Marine and the Aegean which is to include, once again, the Harbours Corps following nearly three years of disruption after the 2009 autumn general election and the despicable actions of the Socialist Government of George A. Papandreou in making everything possible to destroy the Greek Nation’s number one earner: Shipping!

During the Greek Shipping Co-operation Committee’s AGM and elections in London yesterday afternoon, its re-elected Chairman Harry J. Fafalios send a clear message, by reading what he wrote before the elections results where known, expecting to see the end of bureaucracy, transparency to govern and the reinstatement of the Ministry of Mercantile Marine together with the inclusion of the Harbours Corps in order the country to see the return and increase of investments!

In his brief, but to the point message in the Annual Report, Harry J. Fafalios covered the entire state of the industry and the world economy and its worth noting that: “For Greece as well this is a time of painful adjustment but also of opportunity. Whatever Government emerges following the elections of 17th June, must have as one of its principal goals to utilise the country’s strong standing as the leading  E.U. Shipping  nation  and work with it  positively.”

We at allaboutshipping strongly believe that there is a unique opportunity: the newly appointed Minister and Undersecretary of Shipping and the Aegean Costis Moussouroulis and George Vernicos, both being well educated and with a successful past, to work towards one goal: that of success of the number one pillar of the Greek economy.-

We herebelow have the latest video of John Faraclas of his live appearance in SBCTV’s special program this afternoon with the Channel’s Vassilis Tsekouras and shipping journalist Petros Diplas and will soon revert with a free translation.