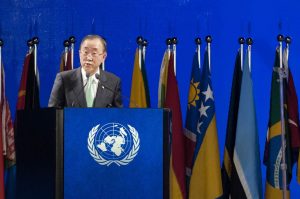 22 to 23 June 2012 – Secretary-General Ban Ki-moon today urged world leaders to build on the commitments they made during the United Nations Conference on Sustainable Development (Rio+20) to achieve economic, environmental and social prosperity for people all over the world. “The speeches are over. Now the work begins, ” Mr. Ban said at the closing ceremony of the three-day summit, in Rio de Janeiro, Brazil.

“Rio+20 has affirmed fundamental principles – renewed essential commitments – and given us new direction, ” he added. “From governments to the world’s biggest companies, from philanthropic organizations to youth volunteers, they are part of a growing global movement for change.”

Rio+20 was attended by some 100 Heads of State and government, along with thousands of representatives from non-governmental organizations, the private sector and civil society, all seeking to help shape new policies to promote global prosperity, reduce poverty and advance social equity and environmental protection.

In his remarks at the ceremony, the UN chief said he was also encouraged by the more than 700 concrete commitments registered at the Conference from governments, business, industry, financial institutions and civil society among other groups.

Some $513 billion in funding was committed during Rio+20 for several issues, including energy, food security, access to drinking water and management of the oceans, among others.

A wide range of actions have also been pledged, such as planting 100 million trees, empowering 5, 000 women entrepreneurs in green economy businesses in Africa, and recycling 800, 000 tons of polyvinyl chloride (commonly known as PVC) – one of the most widely used plastics – per year.

A key element on Rio+20 was its outcome document, entitled “The Future We Want” and agreed on by Member States after negotiations. Mr. Ban welcomed its adoption.

“The outcome document provides a firm foundation for social, economic and environmental well-being, ” the Secretary-General said. “It is now our responsibility to build on it. Rio+20 has affirmed fundamental principles – renewed essential commitments – and given us new direction.”

The outcome document calls for a wide range of actions. These include beginning the process to establish sustainable development goals; detailing how the green economy can be used as a tool to achieve sustainable development; strengthening the UN Environment Programme (UNEP); promoting corporate sustainability reporting measures; taking steps to go beyond gross domestic product to assess the well-being of a country; developing a strategy for sustainable development financing; and, adopting a framework for tackling sustainable consumption and production.

It also focuses on improving gender equity; recognizing the importance of voluntary commitments on sustainable development; and stressing the need to engage civil society and incorporate science into policy; among other points.

“Sustainable development is the only option for humanity, for our shared planet, for our common future, ” Rio+20’s Secretary-General, Sha Zukang, said in his closing remarks. “Let the commitments of Rio be with us all, as we continue our journey towards a sustainable future.”

“Twenty years ago, here in Rio, we put in place key principles and international agreements to guide our efforts, ” Mr. Sha said. “Rio+20 carries on that tradition, and has laid out a framework for action to expedite implementation.”

Over 50 million people from all over the world also participated in the Conference through social media platforms, voicing their comments, opinions and ideas, making the platforms a key component in establishing a conversation on sustainability issues both in the lead up and during the Conference.

“Our job now is to create a critical mass, an irresistible momentum. Because the road ahead is long and hard, ” Mr. Ban noted. “Rio+20 has given us a solid platform to build on. And it has given us the tools to build with – the work starts now.”