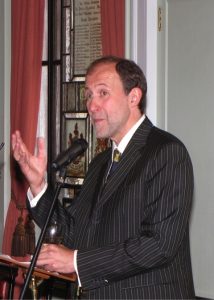 George Grishin, who has helped impart “the London market experience” to marine insurance in much of eastern Europe, including Russia, is to extend his business interests to the Iberian peninsula.  Mr Grishin revealed that he and his wife Katerina, who is also an insurance specialist, are moving to Spain, while continuing to develop their City business Oakeshott Insurance.

He had a most attentive audience for his announcement, having invited some 100 members of the London insurance and shipping markets to a reception at Trinity House for the occasion of his 50th birthday.

Mr Grishin was in his usual fine oratorical form as he addressed the gathering, with his gentle sense of humour, but his serious news was: “Today is also a big day for my family, as we are moving to live and work in Spain; for a year, to start with, but it is a big move for us. Business as usual – the marine team stays here, whilst Katya and I will be developing the Spanish bit, as well as working with our existing clients in Russia and many other countries.”

He was speaking just as the Ukraine versus England game was about to begin in the European Cup, and observed: “Insurance is very much like football. It is not so much about the system you use – W or 4:2:4, ICC (Institute Cargo Clauses) 1982 or 2009. It is more about the team spirit, about the support one feels. And about following the rules – London is all about fair play, in the game of shipping, the game of insurance, the game of liability – and in sport.” 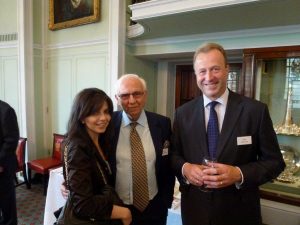 Mr Grishin, who in 1993 became the first broker of Russian origin to be authorised in the UK, began working in insurance in Moscow, and this year he will have been 28 years in the profession. He paid tribute to insurance personalities in P&I and broking who had inspired him, including Stephen James, Hugo Wynn-Williams, Michael Newberry, Andrew Barker, Simon Aubrey-Jones, Nick Fairfax, the Garthwaites, Howard Franks, Sam Ignarski, Pierre Bou Mansour, Stephen Cropper, Alan Wilkin and Emma Russell, and to those working alongside him at Oakeshott: his wife, and Barry Pierce and Samson Akande.

The London insurance market, he said, was “a fantastic place to work and live in.” Spiritually, London is a global village, “a place where everyone knows each other, and where people smile and joke with each other at the watering place or the village well… even if they are each other’s worst nightmare when competition strikes in. “

The City, which in the 1980s was a very traditionally English place, had become much more international. Eastern Europeans had arrived and been accepted here, “and reformed into the true English spirit. Becoming more and more international each year, London manages to stay quintessentially English.”

He summed up: “What Oakeshott and I myself have been doing over the last 19 years, was spreading this Spirit of London over the part of the world we work in – the former Soviet Union and eastern Europe. We organise free seminars, write books and brochures. We introduced [to countries in the east] the idea of co-reinsurance, back in 1995, and of following the leader, in 1996.”  London ideas and principles had penetrated their day-to-day insurance:.  “utmost good faith, fair play, causation, indemnity, a pint or half, bitter or lager, cover-note or slip, ” he said, unable to resist the type of quip that has endeared him all who do business with him.

Oakeshott deputy director Mr Pierce said: “We are all impressed with George’s dedication and passion for insurance.” When he first met Mr Grishin 17 years ago, “even then it was it was clear that George was very driven, ambitious and was always going to succeed in life, particularly with the support from his family and most important of all, his colleagues!

Mr Grishin generously shares his knowledge and research into marine insurance with all around him, being author of two substantial books and 16 pamphlets in English and Russian. He is working on a new volume on the subject of cargo insurance.  He is a keen traveller and has a big following for his stories and photos in the bilingual TravClub circular.

His father, Vladimir Grishin, who has been present at George’s birthday parties in London, Moscow and Kiev, is also an author, having written books about Cuba and about energy.