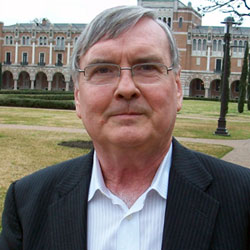 LOUISVILLE, KY – June 26, 2012 – (Marine NewsWire) Steve H. Murdock (pictured) , former director of the U.S. Census, will be the keynote speaker at the 2012 International BoatBuilders’ Exhibition and Conference (IBEX) Industry Breakfast at the Kentucky Exposition Center in Louisville Oct. 2. He will speak on how demographic trends in the U.S. population will affect the boating industry.

Murdock was director of the U.S. Bureau of the Census from 2007 to 2009. He is currently professor of sociology at Rice University. He has also been the chair of demography and organization studies at the University of Texas at San Antonio, director of the Institute for Demographic and Socioeconomic Research, department head of rural sociology at Texas A&M University and official state demographer of Texas. He earned his Ph.D. in demography and sociology from the University of Kentucky, and is the author or editor of 13 books and more than 150 articles and technical reports on the implications of current and future demographic and socioeconomic change. He has received numerous honors and awards for his work in sociology and socioeconomics.

“Dr. Murdock will draw on his vast background and experience to share with us his views on the changing demographic landscape in the coming decade and what boating consumers will look like in the coming years, ” said IBEX co-director Carl Cramer. “The subject is of compelling interest to everyone in the boating business, including boat designers, builders, equipment suppliers, distributors and retailers, who will be increasingly selling into a population that has a much higher percentage of Hispanics, African-Americans and Asian-Americans.”

“The 2010 census figures document the profound change that is taking place in the composition of the American population, ” Murdock commented. “The Hispanic population over 18 grew by 45 percent between 2005 and 2010 to make up 16 percent of the nation’s total. Likewise, the number of African-Americans over 18 grew 17 percent over the same period and represents 14 percent of the total, and the Asian-American population was up 46 percent. By 2050, non-Hispanic whites will be a minority.”

Owned and produced by Professional BoatBuilder magazine and the National Marine Manufacturers Association (NMMA), IBEX is the marine industry’s largest technical trade event. For boatbuilders, marine industry dealers, aftermarket suppliers and buyers, designers, repairers, surveyors, and boatyard/marine operators, IBEX is where the business of boating gets done. For the latest information, visit http://www.ibexshow.com/.

The NMMA is the leading association representing the recreational boating industry. NMMA member companies produce more than 80 percent of the boats, engines, trailers, accessories and gear used by boaters in North America. The association is dedicated to industry growth through programs in public policy advocacy, market statistics and research, product quality assurance and promotion of the boating lifestyle. Learn more at http://www.nmma.org/.