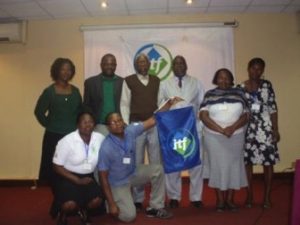 Members of the NCC, including union general secretaries, women’s coordinators and young workers, met in Maputo as part of a three-year union strengthening project for Portuguese speaking regions, organised by the ITF and the trade union solidarity centre of Finland (SASK).

During the meeting the committee, which was formed in June 2011, reviewed its achievements to date and planned next steps.

An education session for members on the simplified labour laws in Mozambique was part of the itinerary of the two-day meeting. The simplification is designed to make the laws more user-friendly for workers during their day-to-day trade union activities and there are plans in the pipeline for workplace education on the legal changes.

Strengthening NCCs is now among the priority projects for the ITF in Africa and formed part of the discussion during the Africa regional committee meeting in Nairobi in May.

Aside from preparations for ARC, the NCC also resolved to reach out to the two non ITF-affiliated unions in Mozambique which cover aviation and communication, and maritime and fisheries, in a bid to expand to expand ITF activity in the country. The NCC is also trying to reach out to the suspended dockers’ union and bring it back into the ITF family.

The NCC also committed to encouraging worker participation during ITF international and local solidarity campaigns and to continuing with the road safety campaigns.