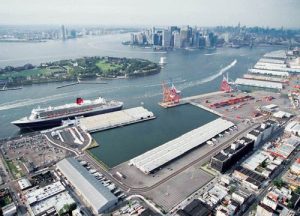 Construction of the East Coast’s first shore power port facility will move forward toward a 2014 completion following today’s action by the Port Authority’s Board of Commissioners. The project will create 30 jobs and result in $22 million in economic activity.

At its monthly meeting, the Board authorized additional funds provided by the Empire State Development Corporation needed to complete the $19.3 million shore power port facility. The project will allow cruise ships serving the Brooklyn Cruise Terminal to plug in to a more environmentally friendly electrical landside power source rather than operating on their diesel generated power while at the dock.

“The cruise industry is a vital contributor to the region’s economy, and today’s action will ensure it continues to drive job growth and economic activity, ” said Port Authority Vice Chairman Scott Rechler. “Today’s action makes good economic sense, is good for the environment and will help make the port more competitive.”

“The Port Authority has a long-standing and unwavering commitment to safeguarding the environment in the communities that host our facilities and across the bi-state region we serve, ” said Port Authority Executive Director Pat Foye. “I want to thank Governor Cuomo for his leadership on this issue, which will create jobs and sustain the long term viability of the Brooklyn Cruise Terminal. The return on our investment in this project will be measured in the tons of toxins removed from the environment, cleaner air and better health for Brooklyn residents who live in the neighborhoods near the terminal.”

“Shore Power will help Brooklyn breath a little easier while maintaining the competitiveness of one of its greatest assets, the working waterfront, ” said Kenneth Adams, President & CEO, Empire State Development. “Under Governor Cuomo’s leadership, we look forward to continuing to work with our partners at the Port Authority to strengthen the economy of the harbor while ensuring a cleaner environment.”

“Shore powers means Brooklyn will be able to breathe a little easier. The implementation of our agreement gets us closer to ending the dirty and dangerous fumes spewed by idling cruise ships at the Red Hook port – and that’s good news for Brooklynites and for our environment, ” said Senator Daniel Squadron. “Thank you to the Port Authority, Empire State Development and all of our colleagues and partners who made today’s great news possible.”

Ships serving the Brooklyn Cruise Terminal are typically in port for up to 11 hours loading and unloading passengers and supplies. While docked, the ship’s power is supplied by auxiliary engines on board the vessel, which are typically powered by high sulfur diesel fuel. The use of shore power will allow two ships calling on the Brooklyn Cruise Terminal – Queen Mary 2, and Caribbean Princess – to connect to an electrical grid on the dock and turn off their engines.

The environmental benefits include an annual reduction of 1, 500 tons of carbon dioxide, 95 tons of nitrous oxide, and 6.5 tons of particulate matter.
Funding for the project includes $12.1 million from the Port Authority, a $2.9 million grant from the U.S. Environmental Protection Agency. On Tuesday, the Empire State Development Corporation voted to allocate $4.3 million from the Port Authority’s Bistate Dredging commitment to New York State to the shore power project. In addition, Princess and Cunard will spend up to $4 million to retrofit its ships. The New York Power Authority will supply electricity to the cruise lines at a fixed and discounted rate for a period of five years, which is valued at roughly $2 million per year.

The Brooklyn Cruise Terminal is owned by the Port Authority and managed by the New York City Economic Development Corporation.