The Nautical Institute elects its youngest ever President 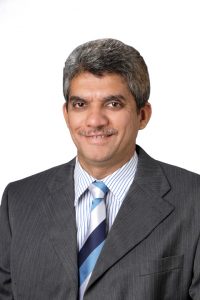 At 47 ‘Krish’, as he prefers to be known, becomes the youngest person ever to have held the office and takes over from previous incumbent Captain James Robinson DSM FNI Irish Navy (Retired).

Describing himself as ‘passionate’ about improving safety at sea Krish said: “One important aspect of my role will be to promote mentoring as a means of raising competence and driving up professional standards, both at sea and ashore.”

Technology will be another key area of focus for Krish during his two year presidency:  “I’m particularly interested in how emerging technology and in particular IT can be harnessed to provide maritime businesses with competitive advantage and sensible management control.”

Krish joined The Nautical Institute in 1996 and played a key role in setting up the India (South) Branch in 2001. He was elected to the governing Council of the Institute in 2004, became a Vice-President in 2006, and was elected as a Fellow in 2008.

Background
Krish was born in 1965 in the southern state of Andhra Pradesh, India. He went to school in Madras and Visakhapatnam and after his higher secondary education began his career at sea in 1982 as a deck cadet with the Dredging Corporation of India.

Krish later joined the Indian merchant navy through Essar Shipping Ltd and in 1993 gained his Master Class 1 Certificate of Competency after studying at Sydney Technical College in Australia. He served, in ascending capacities, to Master, with Univan, Bergessen Worldwide, Bernard Schulte and Tanker Pacific. In 2007, after seven years of command on ocean-going oil tankers, he came ashore to ship management positions and is currently Vice-President, Operations – Technical at Sanmar Shipping Ltd in Chennai.

Krish is married to Durga and has one daughter.

About The Nautical Institute

The Nautical Institute is the international professional body for maritime professionals and others involved in the control of sea-going ships and with an interest in nautical matters. It provides a wide range of services to enhance the professional standing and knowledge of members who are drawn from all sectors of the maritime world. Founded in 1972, it has over 40 branches worldwide and some 6, 500 members in over 110 countries. www.nautinst.org