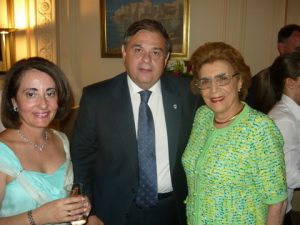 The hosts, Ambassador and Mrs. Aristides Sandis with Marika Lemos the President of GOCO

H.E. Aristides Sandis, Ambassador of the Hellenic Republic in the United Kingdom and his wife, honouring the Greek Olympic Team hosted a reception at the Ambassadorial  residence – the historic mansion of Elena Schilitzi-Venizelos in London’s Mayfair district earlier on tonight! John Faraclas was there with his camera reporting:

All sectors of the Hellenic society, in a unique performance of unity, where represented: Former Olympic Gold medallist in Rome’s 1960 Games King Constantine, winner sailing’s Dragon Class, with Queen Anna-Maria;  former Olympic gold medallist, weight-lifter MP Pyrros Demas was there too; The Clergy headed by Archbishop Gregorius of Thyateira and Great Britain; 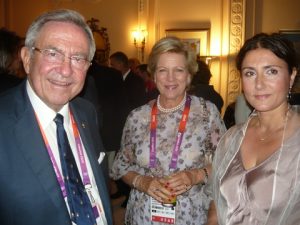 The President of the Greek Olympic Committee Spyros Kapralos;  the Shipping fraternity and members of the Greek Shipping Cooperation Committee including its President Harry J. Fafalios, Stathes Kulukundis, Spiro Polemis, Alexandros Kedros; the Charitable Hellenic Societies in Great Britain, the Shipping Attache Captain (HCG) George Seferiades, the Military Attache Captain (HN) Anastassios Tserkezoglou and his wife, the Hellenic Air Forces representative Lt. Colonel  (HAF) Tsiotis  and his wife; members and staff of the Greek Embassy and Consulate – the entire compound was there! 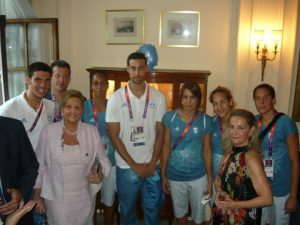 Athletes, Sports Journalists, Athletic Coaches from the Greek Olympic Team, the head of Greece’s Olympic Mission Isidore Kouvelos, and Spyros Zanias, Chairman of the Olympic Torch Relay Commission; the Undersecretary for sports Minister Yiannis Ioannides, Academics headed by Professor Costas Grammenos; actress Ino Menegaki, who played the high priestess and kindled the light of the Olympic Flame in the ceremony at ancient Olympia back in May- caught the sun’s rays in a parabolic mirror leading to the unique Torch relay which ends in a few hours just before the Games begin tomorrow; soprano  Anastasia Zannis – watch her at Carlton Club on the 1st of August, the President of the British-Hellenic Chamber of Commerce  Harris Ikonomopoulos  whose Chambers’ initiative of the “House of Hellenes” at Carlton Club will show how united and determined the Greeks are in all aspects of daily life; the head of the Greek National Tourism Organisation Kiriaki Boulasidou and over two hundreds more! Despite a couple of hick-ups the Greek Team is expected to do well! 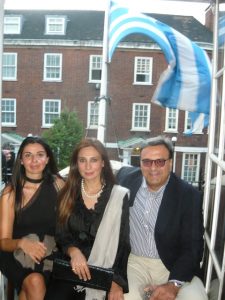 A reminder to all: It is indeed the Greek Mind on a Healthy Body the biggest meaning of life depicted with the Olympic Games, when a Truce, the Olympic Truce was the …name of the Game; today, who can give peace a chance?