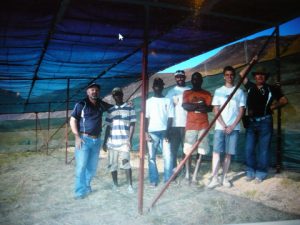 GAC Angola has joined forces with conservationists in their battle to turn back the tide of deforestation threatening the unique habitat on the country’s tallest peak.

Land clearance and forest fires have reduced the mountain forests of the 2, 620 metre high Mount Moco to a few patches, robbing many rare flora and fauna, including rare birds like the Swierstra’s Francolin, of their natural home. In response, the Mount Moco Project started a pilot scheme in July 2010 establishing a small nursery to grow sapling native hard wood trees to be replanted on the mountain slopes. The project is supported by the Rufford Small Grants Foundation and CGGVeritas, run in cooperation with the local Kanjonde community, and employs villagers to tend the saplings.

In May this year, a new, larger nursery was designed and built with the support of GAC Angola. In addition to providing funding to the tune of approximately USD 5, 000, the company weighed in with professional expertise to help bring the project to fruition. Thanks to their local contacts, many of the materials were sourced just 300 km from the site (instead of 900 km away in Luanda), while specialist materials, experts and a generator were brought in from the capital, and the long drive to Mount Moco – including 40 bumpy kilometres off-road to Kanjonde – was arranged.

And when the time came to put it all together, GAC Angola’s former General Manager Gerrit Laubscher, his son Herman, and new GM Michael Sturesson were hands-on to help with the construction.

The 5 metres x 20 metres shade cloth nursery is now waiting for the favourable conditions of October’s rainy season this year when the team plan to plant 400 new saplings into the nursery. This adds to the 120 trees from the original nursery that will help bring the wildlife of Mount Moco back from the brink. Some of the trees will be ready for planting on the mountain as soon as next year.

Gerrit says: “Caring for the environment gets top priority in our organisation, as evidenced by the President’s Award for Environmental Excellence, and at GAC Angola we are keen to give something back to our host country.

“By supporting this project we hope to help preserve Mount Moco’s Afromontane forests, and the endemic birdlife it is home to, for future generations.”

Michael Mills from the Mount Moco Project adds: “Not only will the expanded nursery facility help improve our ability to conserve this fragile habitat on Mount Moco, it will also ensure the employment of at least one more person from Kanjonde village. Many thanks to GAC Angola for their support.”

For more about the Mount Moco Project, go to www.mountmoco.org

About the GAC Group