Latest situ on the Arctic… 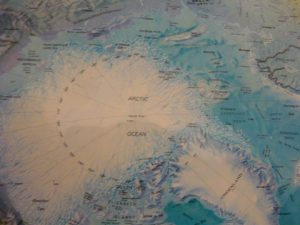 As the Arctic Opens for Oil, the Coast Guard Scrambles

Royal Dutch Shell (RDS/A) has spent $4.5 billion since 2005 preparing to explore for oil off Alaska’s north coast in the Arctic. Shell, which may begin drilling next month, is one of at least six companies planning to extract oil, gas, and minerals from the Arctic as global warming melts ice and opens new sea lanes to commerce. The Arctic region holds about a fourth of the world’s undiscovered oil and natural gas, according to the U.S. Geological Survey. About 84 percent of this treasure trove lies beneath the ocean floor. The U.S. has more than 1, 000 miles of Arctic shoreline, and much of the country’s Arctic oil is there.

As the oil companies move into the Arctic, so must the U.S. Coast Guard, to project the country’s presence in a vital part of the world, perform sea rescues, and coordinate the government’s response to any oil spills. To date, the Coast Guard lacks appropriate communications and navigation systems and will need at least $3 billion in additional vessels and equipment, according to assessments by the Congressional Research Service and the Coast Guard itself. Without more icebreakers, the service will be “unable to accomplish its Arctic missions, ” according to a report last year by the U.S. Department of Homeland Security’s inspector general. “If we are going to have a permanent presence there, it’s going to require some investment, ” says Admiral Robert Papp, the Coast Guard commandant.

Other countries are racing to claim their piece of the Arctic bonanza. In a symbolic gesture, Russia in 2007 dropped a capsule containing its flag into the Arctic Ocean; it sank to the seafloor 14, 000 feet below the North Pole, staking Russia’s claim for oil and gas reserves there. Canada plans to purchase armed icebreakers to protect its interests. China, which doesn’t have an Arctic border, has signed energy agreements with Iceland, which does.

The Hague-based Shell, Europe’s biggest oil company, will be the first to resume operations in the Arctic, which was last explored in the early 1990s, before lower oil prices reduced prospects for profit. Shell is awaiting final approval from the U.S. to begin drilling. ConocoPhillips (COP) of the U.S. and Statoil (STO) of Norway have also won rights to explore fields in the U.S. portion of the Arctic. ExxonMobil (XOM), the biggest energy company by market value, has reached an agreement with Russia to explore its area of the Arctic. Other companies with plans for the region include BP (BP), Imperial Oil (IMO), and Chevron (CVX).

Although the ice is receding—and Greenland’s ice sheet is melting at a record pace—the Arctic remains a vast forbidding area with hurricane-strength storms, below-freezing temperatures, and large ice floes, making icebreakers critical. “Even with the open sea lanes, the Arctic is immensely dangerous, ” Peter Harrison, director of the school of policy studies at Queen’s University in Ontario, said at a Brookings Institution conference on the subject last month. “If anyone thinks it’s like Lake Michigan in July and August, they are dreaming in Technicolor.”

Commandant Papp says the Coast Guard eventually will need three medium-duty and three heavy-duty icebreakers to operate in the polar regions. It now has one medium-duty icebreaker and two heavy-duty ones dating from the 1970s, neither of which is operable. (The service plans to repair one of them.) To meet Papp’s goal of six icebreakers, the government would have to spend about $3.2 billion, according to a Congressional Research Service report.

Neither Congress nor the Obama administration has proposed spending that kind of money. The Obama fiscal 2013 budget calls for $8 million to study building one. The Coast Guard’s five-year plan has called for $852 million for a ship’s construction, although Congress has yet to address the funding. It can take as long as 10 years to build an icebreaker.

Russia has 25 icebreakers, which are being used “to assert sovereign control over the Arctic region and its valuable resources, ” according to the Congressional Research Service report, which was released in April. Finland and Sweden have seven icebreakers each, and Canada has six, the report says. China has one icebreaker in operation and one under construction. “This is an internationally competitive area where we must start paying attention, ” says Representative David Price (D-N.C.), a ranking member of a House Appropriations subcommittee in charge of allocating money. “The Coast Guard is going to be called on to do a lot of things up there, and we can’t limp along with our current icebreaker capacity.”

To oversee the Shell drilling, the Coast Guard plans to send two helicopters and two cutters to the Arctic, including one of its three flagship National Security Cutters, which can navigate the high seas, serve as a sophisticated communications center, and operate its own helicopter pad. The Coast Guard opened a temporary base in Barrow, Alaska, on July 16. It will practice oil spill responses and other maneuvers to test equipment and personnel readiness, says Vice Admiral Peter Neffenger, deputy commandant for operations. “Our goal is to have a presence up there that can adequately address the activity for this summer and then to think about what it means for the future, ” says Neffenger.

Shell is deploying 33 vessels and 600 workers for its Arctic venture, says Steve Phelps, Shell’s manager of exploration for Alaska. “We know the region is very remote and very dangerous, ” Phelps says. “We realize if we need it, we have to bring it.”

The bottom line: At least six oil companies plan to prospect in the Arctic. The U.S. is poorly positioned to police them.

Cybersecurity will remain a Maritime threat in 2021