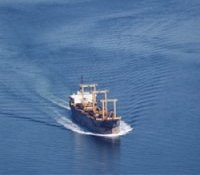 200-12 06.08.2012: 0230 LT: Jakarta Anchorage, Indonesia Four robbers boarded an anchored bulk carrier. They broke open the aft store and stole ship’s property. Duty O/S spotted the robbers, raised alarm and ran after the robbers. While the O/S was grappling with two of the robbers, the other two robbers jumped into the water with the stolen ship property. On seeing the other crew approaching, the remaining two robbers jumped into the water and escaped with their accomplices.
199-12 21.07.2012: 0540 LT: Posn: 31:09N – 029:48E, El Dekheila Port, Egypt Six robbers in two boats approached a berthed bulk carrier from fore and aft during cargo operations. Without boarding the ship, the robbers were able to cut away and escape with two head and stern line eyes. Luckily vessel remained alongside and the crew was able to re moor the vessel.Port authority informed.
198-12 30.07.2012: 0140 LT: Posn: 06:02.5N – 001:16.5E, Lome Anchorage, Togo Five robbers in a wooden boat approached an anchored chemical tanker. Alarm raised, crew mustered in the citadel and Togo navy notified. The robbers aborted the attempt and moved away upon seeing the navy patrol boat approaching. Later at 0312 LT, another two boats with 16 persons approached and came alongside the vessel from both sides and were observed to investigate the fending arrangements around the vessel. Togo navy failed to respond to calls made by the vessel. Alarm raised and continuous ship’s whistle sounded resulting in the persons moving away.
197-12 02.08.2012: 0230 LT: Dumai Anchorage, Indonesia Five robbers armed with long machetes and knives boarded an anchored chemical tanker. Three crew members were taken hostage and their hands were tied. The robbers stole engine spares and escaped. No injuries to crew.
196-12 27.07.2012: 0200 LT: Between Kudat port and Bangi Island, Sabah, Malaysia Pirates in a speed boat attacked and hijacked a tug towing a barge while en route to Samarinda, Indonesia. The pirates placed the 12 crew members in a life raft and set them adrift. The hijackers sailed the tug and barge to an unknown location. The 12 crew members were rescued by the Philippines Coast Guard. The tug and barge are still missing. Upon receipt of this report, the IMB Piracy Reporting Centre informed all authorities in the region and transmitted a satellite broadcast to ships in the Asean Region and South China Sea.
195-12 31.07.2012: 0840 UTC: Posn: 03:49.4N – 077:09.7W, Buenaventura Anchorage, Colombia Three robbers on a black motor boat boarded an anchored bulk carrier. They broke padlock at forecastle paint store and forward store. They were noticed by duty crew who informed the duty officer on bridge. Alarm raised. Robbers jumped into the water and escaped in the waiting boat. Coast Guard informed. Upon investigation it was discovered ship’s stores were stolen.
194-12 13 to 20 July 2012: During passage in the Malacca Straits An accommodation barge under tow by a tug from Penang to Pasir Gudang port arrived at anchorage and dropped anchor. Shipyard representatives boarded the barge and later the tug. They informed the tug Master that the cargo on the barge’s deck had been pilfered. It is suspected the theft may have taken place while on passage. A police report was lodged.
193-12 27.07.2012: 0030 UTC: Posn: 06:00N – 001:17E, Around 8nm of Lome, Togo Robbers in three boats approached and attempted to board an anchored tanker. Master raised alarm and crew activated fire hoses towards the boats. The robbers used rain coats and continued their attempt. Master heaved up anchor and proceed further away from the location. Togo navy informed.
192-12 28.07.2012: 0400 LT: Posn: 07:11.85S – 112:43.57E, Tanjung Perak Port, Surabaya, Indonesia Two robbers armed with knives boarded a berthed chemical tanker. Ship’s property was stolen. Later, crew caught the robbers and recovered the stolen items.
191-12 22.07.2012: 0610 LT: Posn: 01:06N – 103:28E, Karimun Transhipment Anchorage, Indonesia Robbers in a long wooden boat boarded an anchored tanker and entered the engine room. Engine room crew informed bridge and the alarm was raised when 3/Eng was chased by a robber with an iron rod. The robbers stole engine spares and escaped in their boat. Incident reported to Karimun Pilot Station and to the Coast Guard via local agent. Coast Guard officers and two port patrol officials boarded the tanker for investigation.