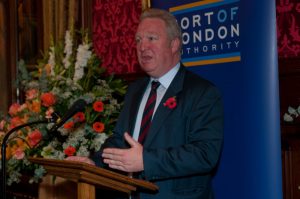 To coincide with today’s annual event in honour of British shipping, the Anglo-Dutch union’s general secretary Mark Dickinson has written to the minister to voice renewed concern over the lack of a detailed strategic policy for UK maritime industries and services – a sector which contributes some GBP26.5bn to UK GDP, support more than half a million jobs and provide almost £8bn a year in tax revenues.

In his letter Mr Dickinson claims there is no coherent approach to the maritime sector from the various government departments that have interests in the area and urges the minister to produce a clearly defined policy for the shipping industry, setting strategic targets for the UK fleet and the UK maritime skills base. He warns the minister that the UK’s “depressing” failure to be among the 30 countries that have brought the Maritime Labour Convention into effect “‘reflects a further erosion of the UK’s claim to be a major maritime nation”.

“On Merchant Navy Day I am writing to reiterate my union’s request for the government to treat the shipping industry with the importance that it deserves, ’ Mr Dickinson adds. ‘There is an increasingly urgent need to revisit the objectives that were set out in Charting A New Course policy document and to provide a “joined-up” policy approach across government to all aspects of our maritime sector and to deliver what John Prescott once described as “action in deed”.’