Seawater washing: is this the solution to reduce noxious emissions from ships? 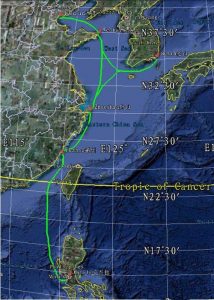 Route taken by tanker Rui He during exhaust cleaning trials

Seawater washing: is this the solution to reduce noxious emissions from ships?By James Brewer

Ship owners are being invited to participate in the test marketing and trial of what is claimed to be one of the most green and economical solutions for reducing emissions from ships. The solution is said to arise from the very nature of the sea itself: the cleansing power of natural sea water.

The initiative comes at a time when the maritime trades are finding that the push for economic growth, patchy though the results may be, clashes with the need for protection of the environment.

What is known as the Natural Sea Water (NSW) Scrubbing Process has been launched by the joint venture MarineProTech Inc (US) and China Environmental Project Tech Inc run from Wuhan, China. It has designed and manufactured scrubbing equipment – for installation within the exhaust function of a ship, as opposed to external systems – using sea water as the core scrubbing medium. This is said to yield a cost reduction of up to 25% compared with rival applications using chemical cleaning.

The goal is to enable ship owners and ports to achieve targets set by the International Maritime Organization, the European Union and federal and state US authorities on schedule and at reasonable price.

Jonathan Peng, founder and president, and chief marketing director Jerry Zhao have been taking their message to the international market.  This September they were in London to meet shipping interests, travelling on to Italy and France. At the beginning of the year the company met the California Air Resources Board for discussions on the North American emissions control area. There was a further meeting with officials of California State University Maritime Campus with regard to potential technical exchanges.

The company is promoting natural sea water as an efficient and environmentally friendly product for scrubbing sea-vessel exhaust gas. Its corporate vision is the facilitation of intercontinental commerce by marine vessels operating on low-cost standard oil but emitting no harmful emissions.

Mr Peng told a reception in London of members of WISTA-UK (part of the Women’s International Shipping & Trading Association) this month: “Our goal is to lower the cost of pollution reduction; lower, and lower, and lower again.” He told us later that the use of seawater as a means of protecting the environment was in harmony with traditional Chinese philosophy. 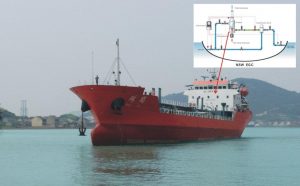 Shipowners are being invited to select one of the company’s two product series according to the route of their proposed trial ship, for involvement in test marketing.

MarineProTech/China Environmental Project Tech has already financed a continuous operation sea trial on the heavy duty motor tanker, the 4, 999 dwt Rui He. With the NSW device installed, there was reported to be trouble-free operation with the main engine, treating 100% of exhaust gas, without bypass. The reduction effect was in line with the IMO maritime environment protection committee MEPC184 (59) resolution. From July to Sept 2011, the tanker sailed through the waters of China, the Philippines, and South Korea, with centralised monitoring by China Classification Society and total trial time of more than 2, 000 hours.

Mr Peng says that his organisation has a track record of success in using the natural seawater process in coal-fired power plants since 1999, with current total installed capacity of more than 16, 000MW achieving annual emissions reduction of more than 1m tonnes of suphur dioxide, or 27% of China’s annual emission reductions. This reduction is equivalent to SO2 emissions of around 600 tankers of 300, 000dwt. Used on vessels, the sea water process incorporates and enhances the advantages of application to harbour power plants, it is said.

Ships fitted with the system at 3.5% sulphur content fuel, will release emissions equivalent to using 0.1% sulphur fuel, claims the venture. It offers two systems: NSW EGC which has the main function of sulphur dioxide emission reduction and exhaust scrubbing; and NSW SYS, based on the former, integrated with nitrogen oxide reduction, and recovery of gas boiler waste heat.

The second of these systems is designed for vessels entering the North American emissions control area, where they are required to control both SO2 and NOx emissions.

With retrofitting, there are no special requirements on the ship’s space. The scrubber is integrated with the original silencer. The small amount of auxiliary equipment is distributed in available free space. Total weight is only around 0.5% of the total bareboat weight. The modification, which is subject to approval of the designer and ship classification society, has no impact on sailing stability, say proponents. There is only a very small increase in crew workload for maintenance, while there is a moderation of the high temperatures in which it has to work.

Mr Peng says it is important to overcome dependence on distillate fuel, especially by introducing what he says is the relatively mature technology of sea water scrubbing.

Mr Peng called for the industry to take advantage of the experience gained by applications on land, which could save much preliminary research, development and test time for design, prototype and validation of marine equipment. In this way, ship emission reduction technology for practical use could be brought forward at least five to 10 years.

As environmental conditions varied widely, each marine emission reduction process should be tested in mainstream ships of different sizes. Only a small number of manufacturers were pursuing trials in seagoing ships, and slow progress would fail to meet the EU ship emission reduction schedule.

Mr Peng underlined the positive advantages for ports which would be freed from handling and disposing of additional raw materials and waste.

He insisted that the sea water application was the only green way to achieve the air pollution reduction goals of the EU, which he hoped legislators internationally, ship owners and shipyards, would recognise as soon as possible.

All About Shipping » Blog Archive » Seawater washing: is this the solution to reduce noxious emissions from ships? | Marine Litter News November 5, 2012 - 3:31 AM