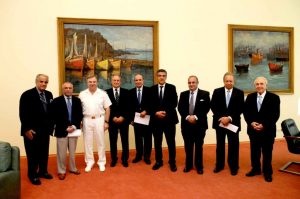 Earlier this afternoon,   28th September 2012 the Chairman of the GSCC, Mr. Charalambos J. Fafalios, together with Vice Chairmen Constantine I. Caroussis and John M. Lyras, as well as other senior GSCC Council members met with the Minister of Mercantile Marine and The Aegean, Mr. Kostis Moussouroulis, and the Commandant of the Harbour Corps./Hellenic Coast Guard, Vice-Admiral Dimitrios Bantias. From the Ministry’s side, the meeting was also attended by Lt. Commander Haris Bournias and the Minister’s  Diplomatic Counsellor, Mr. Konstantinos Koutras.

The Minister presented a detailed, informative and well-presented PowerPoint presentation showing the organisation and detailed departmental functions of the Ministry and the Hellenic Coast Guard following the ministry’s re-establishment as the   Ministry of Shipping and The Aegean (YNA) and the re-establishment of the Ministry as a “one stop shop” for maritime matters. Most active HCG personnel had already been returned to YNA and pending legislation, whereby any remaining personnel still under the control of other ministries, would also be returned to YNA was also awaited. A significant number of HCG officers had, however, retired from the service during the recent period of fragmentation of the HCG.

A comprehensive agenda of issues currently being faced by the Greek shipping industry was discussed. The Chairman stressed the importance of the Ministry supporting the industry’s position on pending environmental measures which, he said, would encourage financial speculation, to the detriment of the shipping industry, in general, and the Greek shipping industry, in particular, without effectively protecting the environment. The Minister responded that he was well aware of such issues and that the Government had always been in complete agreement with the industry position on these issues, as expressed by the UGS and GSCC.

The importance of  HCG officers representing Greece at international regulatory bodies, such as IMO and the EU, for periods long enough for the officers to become experienced, was stressed. The Commandant responded to the effect that, as important as the period of the posting was the training of the eventual replacement personnel, thus to ensure continuity and that officers relieving their predecessors at international postings would be able to assume their new duties in a seamless fashion.

The difficulties anticipated with the Ballast Water Convention and, in particular, the considerably more stringent requirements demanded by the US Coast Guard were discussed and the Minister asked whether the problem meant that Greece should accelerate its ratification of the Ballast Water Convention in order to accelerate its entry into force, thus to discourage States, such as the USA, from taking unilateral action. However, the GSCC continued to support the position taken on this issue by the Union of Greek Shipowners.

On the subject of piracy and the permits required for the employment on board Greek flag vessels of private armed guards, the Commandant expressed surprise at the reports of the GSCC representatives present that delays of two to three weeks were being experienced with the Ministry’s processing of such applications. The Minister said that such problems would be investigated with a view to reducing the processing time for such applications to one week at the most.

The atmosphere at the meeting was extremely friendly and positive and the Minister expressed the desire to be informed “first hand” of any problems experienced by the Greek shipping industry.