Lessons of environmental awareness by the youth 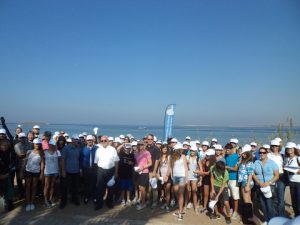 Despite their young age, 60 American Community School (ACS) students set an admirable example to adults by recently volunteering to clean-up Kavouri beach in Vouliagmeni in the continuing fight for marine environmental protection.

Following a successful clean-up last April and within the framework of the 2012 International Coastal Clean-up (ICC) campaign, the Hellenic Marine Environment Protection Association – HELMEPA, U.S. Embassy Athens volunteers, and ACS students combined forces again on Friday, October 5, and tackled a second beach clean-up giving everyone the opportunity to assess the impact on the environment following four months of intensive use by beachgoers.

Besides the ACS students and their teachers, participants also included 25 U.S. Embassy officials and divers from the Athina Diving Center who performed an underwater clean-up of the area. Present at the event were the Captain of the local Port Authority and representatives of the Municipality of Vari-Voula-Vouliagmeni and of Anatolia College, which is organizing a similar activity in Thessaloniki on Friday 12th October. 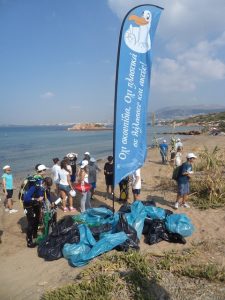 The event kicked-off with a welcoming address by U.S. Ambassador Daniel B. Smith who wholeheartedly expressed his appreciation to the volunteers for attending and participating in what he termed a “unique opportunity to celebrate the ICC campaign together” and continuing the “outstanding” work HELMEPA has done over 30 years to protect the marine environment.  “Greece’s beaches and its oceans are not just a national treasure, they’re a local treasure and we’re delighted to be able to play our part in helping protect this very delicate ecosystem from man-made damage, ” he said.

On behalf of HELMEPA, former Chairman of the Association and current Board member Mr. Nicky Pappadakis welcomed the participants stressing the significance of such symbolic actions, which are vital for securing a bright future. Addressing the ACS students in particular, he wished them the best of luck stating that they “are an inspiration for all.”

Following the remarks, the Ambassador and his wife Diane Smith pulled on their gloves and joined HELMEPA’s Director General, Dimitris Mitsatsos, in the clean-up effort.

Overall, in terms of marine litter found, the beach was in a better condition  compared to April. 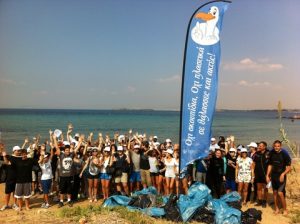 Volunteers and their findings

Nevertheless, volunteers filled forty large plastic bags with all types of litter, primarily plastics such as lids/caps, straws, bags and food wrappers, all of which which are associated with coastal recerational activities, as well as large amounts of cigarette ends. Twenty five of the large plastic bags containing recyclables were collected by the Hellenic Recovery Recycling Coorporation and forwarded to the closest recycling unit.