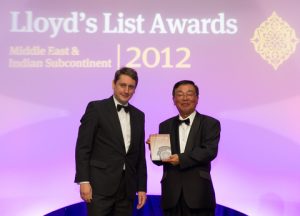 This is the first time that ClassNK has received the prestigious Classification Society Award, which is given to the classification society that contributed the most to maritime activities in the Middle East and Indian subcontinent. Numerous factors contributed to ClassNK receiving the Award. 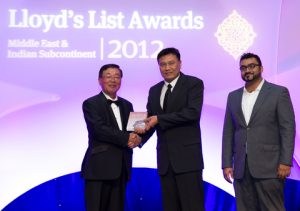 Mr. Ueda’s  receiving with a handshake the award from Mr. Abu Bakar Mohd Nor , CEO of N-KOM and Ali Al Sayed who entertained the audience prior to the presentation.

These include ClassNK activities in the Middle East region such as helping the UAE develop its own new domestic classification society, establishing new Survey Offices organizing ClassNK Academy in the region, and donating technical libraries to academic institutions. The Award further acknowledges ClassNK operations in the Indian subcontinent including survey operations at shipyards for newly-built and existing ships, providing training to improve safety of seafarers, and recognizes ClassNK high quality of services.

This Award also highlights ClassNK’s rapid growth in the region, which has seen the world’s largest class society open 7 new offices in the region over the past 4 years. ClassNK, the world’s leading classification society, now has 121 survey offices throughout the world with a total of 18 located in the Middle East and Indian subcontinent.

Issue 5 of “Insight” looks at the global implications of urbanisation