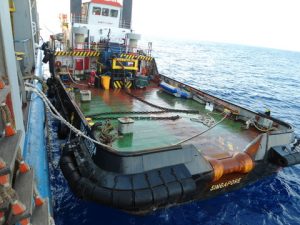 On Wednesday 26th September 2012, the General Cargo Vessel EVERTON of GT 6, 714 and DWT 8, 874 respectively, fully laden with containers, was immobilized (with blackout) due to fire in the engine room and in the accommodation at Mozambique Channel, approximately 180 nautical miles east of Beira. The same day LOF (2011) with SCOPIC invoked was signed between owners/managers of the “EVERTON” and Tsavliris Salvage (International) Ltd.

On the 27th the Guard Utility Vessel “FLEUR DU CAP” was chartered and proceeded to casualty’s position to render standby safety services until the arrival of a suitable tug. On the 28th the nearest available tug “TERAS HYDRA” was chartered from Durban and sailed towards the casualty.

Due to prevailing winds, swell and strong currents in the Mozambique Channel, casualty was drifting in a southerly direction at about 3 knots.

On the 29th September the “FLEUR DU CAP” arrived at the casualty’s position whilst a salvage team of six persons (which had been flown in) left Beira by the contracted Fishing Vessel “VEGAS 12”. 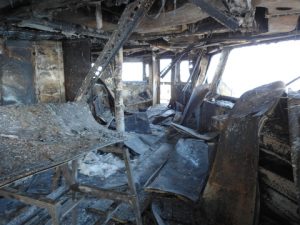 Part of the “Everton’s” burned accomodation

The salvage team arrived and boarded the “EVERTON” on the 1st October, the vessel was supplied with water and provisions for her crew, and the salvage team immediately went about reinstating the e-power.

The salvage team continued to improve the sustainability of the e-systems on board the “EVERTON”, the emergency generator was successfully started up providing lights on the starboard side, and navigation lights were reinstated, etc. Due to the bad weather salvage tug “TERAS HYDRA” did not arrive until the 4th October 2012, and came alongside to provide water and food supplies. Afterwards “TERAS HYDRA” connected the tow line to the “EVERTON” and the convoy proceeded towards Beira.

The convoy arrived at Beira outer anchorage on the 7th October 2012 where “EVERTON” dropped anchor and “TERAS HYDRA” anchored at a close distance awaiting authorization for port entry.

Due to the port congestion at Beira and no available slot in the congested terminal, the decision was made for “EVERTON” to be towed to Durban with a skeleton salvage team onboard the “TERAS HYDRA”. 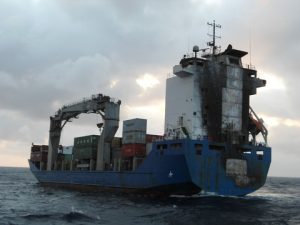 Following preparations to the “EVERTON”, the “TERAS HYDRA” connected to the casualty and began towage to Durban on the 14th October. Prior to arrival at Durban roads the towing chain parted and the casualty was reconnected by the emergency tow line.

Convoy arrived at Durban roads on the 20th October, however attempts to enter port were abandoned due currents and swell; therefore “EVERTON” dropped anchor with “TERAS HYDRA” alongside.

On the 25th October “EVERTON” safely moored at Dormac berth and was provided with shore power and access to firefighting water.

After over one month of salvage services “EVERTON” was safely redelivered to her owners on Monday 29th October 2012.

Corporate Social Responsibility and the Shipping Industry: Towards a Sustainable Journey