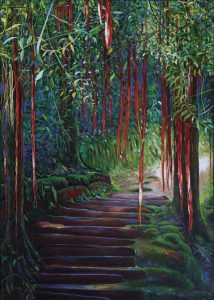 One of east Africa’s most dynamic artists is back in London, where she has spent an important part of her career, to curate a new exhibition celebrating the grandeur of nature in her native Kenya.

Camille Wekesa confronts on a magnificent scale through her canvases and murals the desperate need to conserve the shrinking, age-old, tangled rainforest and its wildlife. The lush scenes she renders draw in the viewer to the most intimate depths of untamed woodland.

She is joined by fellow Kenyan painter Ancient Soi for her show, at Deborah Gage (Works of Art) Ltd, 38 Old Bond Street, in London’s west end.

Camille is deeply committed to the endeavour after which she has named the exhibition: Ancient Remnants – Conserving Kenya’s Heritage.

Her work has won praise over the years from the international press, including publications based in east Africa, and Lloyd’s List.

She has beaten a trail through the dense bush not just  to convey convincingly the primeval nature of her subject matter, but also to heighten awareness to the widest public rich and poor in Africa and around the world of what is at risk in exploitation that is careless of the environment.

Camille channels much of her energy to supporting the conservation efforts of the Lewa Wildlife Conservancy in Kenya, and the idea for an exhibition of this kind emerged during a conversation with Deborah Gage after the painter had completed a mural for Lewa’s pioneering Conservation Education Centre. The mural contrasted a lively wildlife habitat where flora and fauna flourish, with deforestation and encroachment by human settlement. Typically, in that work she created trees in relief form so that children could feel what it is like to touch bark.

Generously, Camille is devoting part of the proceeds of her London event to Lewa, which is said to be the model for wildlife conservation on private land in eastern Africa. A non-profit venture, Lewa employs more than 300 people and encompasses 62, 000 acres, supporting more than 440 species of birds and 70 types of mammals. Four hours drive from the Kenyan capital, Lewa has its own airstrip and encourages public visits. 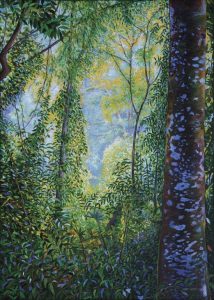 Camille told us: “We know that many of Kenya’s natural glories have been lost or diminished over the last few decades, so the commitment of artists to capturing their essence through their creative work and conserving nature’s surviving precious assets is paramount. Artists have a special responsibility and sensitivity to our common heritage and have an important role in ensuring that this trust will be passed on to future generations.”

For the London display, she concentrates on the Kakamega forest which is the easternmost remnant of the once vast lowland Guineo-Congolian woodland ecosystem and home to primates such as the blue monkey and the red tailed monkey, and over 400 species of butterfly species and 360 of birds.

Camille endorses Kenya’s ambition to bring its forest cover back to the required 10% (currently 2%) as projected in Vision 2030, a development programme to transform Kenya into a middle-income status country.

Camille, who studied art and design in Florence, Milan and Rome, works primarily as a mural artist in Kenya and in Europe, boldly transforming rooms in private houses into tropical forest hideaways dominated by elephant tusk arcades or banana tree lobbies complete with depicitions of monkeys and parrots. Her clients have included members of the Wildenstein art-gallery dynasty (for whom she painted six rooms at their ranch in Nanyuki); Coca Cola Africa for whom she organised the purchase and documentation of over 180 works of African art and was commissioned to paint a boardroom mural; and hotel and other commercial interests. She organised and curated the Contemporary Kenya art show at the Ensign gallery in London in 2004 and showcased Kenyan artists at two London art fairs. 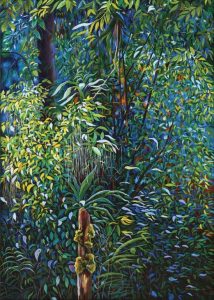 Ancient Soi, whose name chimes perfectly with the title of the show, is among the first of the modern generation of Kenyan painters. He began showing his work in city markets among fruit and kitchenware before being discovered by a leading gallery in Nairobi. Since then he has exhibited widely in Europe and in the US. His colourful and fantastic landscapes bustle with wildlife as in an unspoilt paradise, zebra and antelopes bounding across the plains watched by owls, birds and rabbits.

With this London occasion, Camille is using every opportunity to raise the debate as to how African landscapes can be depicted and conserved on canvas for future generations while having relevance to the international art context; and how more art can be seen by African people not just in museums and galleries but in rural and slum areas.