Jim Davis, presiding over the annual dinner of the International Maritime Industries Forum, saw two reasons for hope of extracting the shipping industry from what he described as “a bit of a mess.” One was its ability to take advantage of fuel efficiency, and the other would be a greater recognition of the need for slow steaming.

He told the gathering on November 7 of some 280 people at the Radisson Blu Hotel in London:“There is only one law that applies to economics and it is that of supply and demand.  All the rest is peripheral. Today we have a situation where there is exaggerated supply. There are too many tankers, the container world is oversupplied, bulk carriers, everything.” 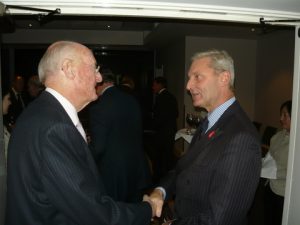 At the same time, the shipbuilders understandably wanted to build. That was fine, but how do we deal with the situation of over-supply? Unfortunately the phenomenon was likely to exist for a very long time to come.Bunkers had become instead of a peripheral cost, one of the greatest. Some ships were going to have to go and there was a great role for shipbuilders to build the new energy efficient ships which will reduce costs of carriage. If the shipbuilders wanted to build they had to help with removal of the older tonnage.  Mr Davis recalled that IMIF originated from a recognition that no one side of the industry could on its own resolve matters. 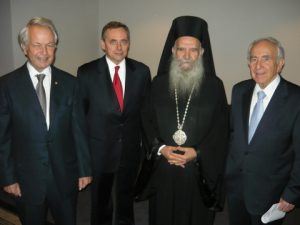 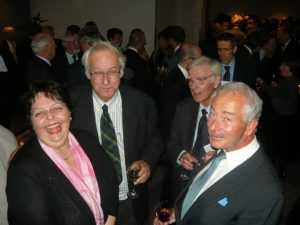 Mr Davis said that membership of IMIF stood for good sense in a very crazy world. He said that shipping had been an under-rewarded industry for a long time.. 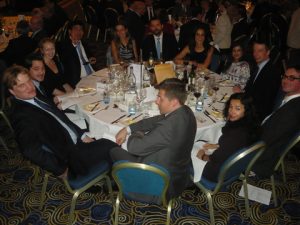 On behalf of those present, Sir John Parker extended thanks for “another splendid evening.”  Sir John has been at various times chairman of five FTSE 100 companies, including currently Anglo American plc and Ombu Group. He is vice chairman of DP World, and a non-executive director of EADS, the owner of Airbus, and a non-executive director of Carnival Corporation. On top of that he is president of the Royal Academy of Engineering. 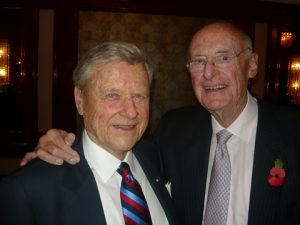 Sir John recalled that he was one of the early committee members of IMIF with Jørgen Jahre, Helmut Sohmen and other major figures.

At the beginning of the evening, Mr Davis lamented the passing of the Rev Tom Heffer, secretary general of The Mission to Seafarers, who died in April at the age of only 43.

Grace was said at this year’s dinner by Archbishop Gregorios of Thyateira and Great Britain. Lastly, congratulations to Victoria Mott for organising and supervising the event! 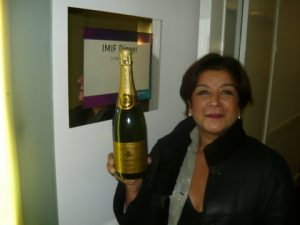 Maria Ester Bobadilla and her trophy

P.S. The Business card Champaign was won by Maria Ester Bobadilla pictured below.