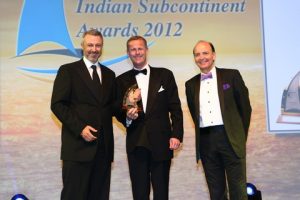 “It is a great pleasure to be recognised for the third time for our Ships Agency services, and the award goes to the entire AMB team for their fantastic efforts. I would also like to thank our customers, many of whom were present at the event. We are looking forward to displaying the award alongside our trophies for 2010 and 2011 at our regional centre in Dubai.

The Seatrade Awards provide the platform for one of the region’s most exciting and coveted maritime shipping and maritime award events. Hosted by British news anchor Jeremy Thompson, the gala event at the spectacular Palm hotel this week was attended by 850 specially invited guests, and was officially announced as the largest shipping industry gathering in the world so far this year.