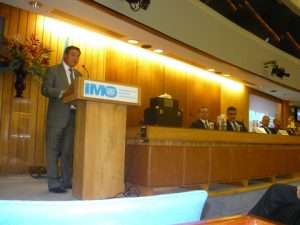 The Secretary-General of the IMO Mr. Koji Sekimizu at the podium announcing the prestigious International Maritime Prize; seated at the panel are the Greek Ambassador Mr. Konstantinos Bikas, The Greek Shipping Minister Mr. Costis Moussouroulis, Admiral Mitropoulos and the Chairman of the Council Jeffrey Lantz

Admiral Efthimios E. Mitropoulos*, Secretary-General Emeritus of IMO, Secretary-General of the Organization from 2004 to 2011, has been awarded the prestigious International Maritime Prize, for his significant contribution to the work of IMO.

IMO Secretary-General Mr. Koji Sekimizupresented the award, a sculpture in the form of a dolphin, to Mr. Mitropoulos, during a special ceremony at IMO Headquarters (on Tuesday, 27 November 2012), on the second day of the Maritime Safety Committee (MSC), 91st session. 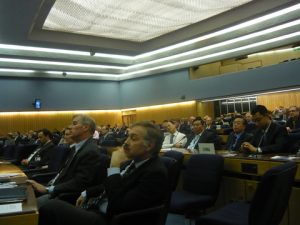 Mr. Mitropoulos was nominated for the prize by the Government of Greece and has been recognized for hisoutstanding contribution to the purposes and functions of IMO during his long and distinguished career with the Organization, culminating in his eight-year stewardship as Secretary-General.

His notable achievements include: 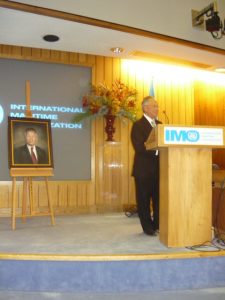 Admiral Mitropoulos at the podium delivering his speech

The International Maritime Prize is awarded annually by IMO to the individual or organization judged to have made the most significant contribution to the work and objectives of IMO.

Also on Tuesday, a portrait of Mr. Mitropoulos was unveiled by the Greek Minister of Shipping, Maritime Affairs & The Aegean Costis Moussouroulis who also gave an address (see same in the site) on the occasion of the award of 2011 Inetrnatonal Maritime Prize. A reception hosted my the Minister was held at the mezzanine floor of the organisation – viewers can see pictures after the Ministers address in the respective article.

The painting, by marine artist Robert Lloyd, will be hung alongside the portraits of other former Secretaries-General of the Organization, at IMO Headquarters in London. 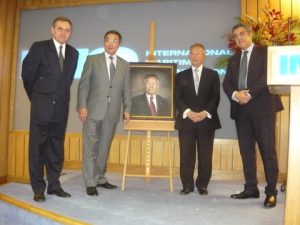 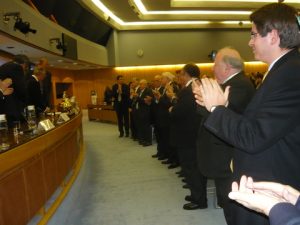 Efthimios (Thimio) E. Mitropoulos was born in Piraeus, Greece, to a maritime family.  He graduated from the Aspropyrgos Merchant Marine Academy in 1959.

Between 1959 and 1962, he served as apprentice, second and chief deck officer on merchant ships on voyages around the world and, in 1962, he entered the Hellenic Coast Guard Academy, graduating in 1964.

He then started his career as a commissioned Coast Guard Officer in Corfu, first and Piraeus, later.  He retired with the rank of Rear Admiral.

During his service with the Greek Maritime Administration, he participated at meetings of the International Labour Organization (ILO), United Nations Conference on Trade and Development (UNCTAD), Organization for Economic Co-operation and Development (OECD) and the Consultative Shipping Group, while his association with IMO goes back to 1965, when he first represented Greece at the meeting of the Sub-Committee on Fire Protection in December of that year.

Between 1966 and 1977, he participated, initially as a member and later as Head of the Greek Delegation, in the work of various Sub-Committees and the Maritime Safety Committee of IMO (which he served also as vice-chairman and chairman of working groups).  He also participated in the work of the Council and the Assembly as well as at the 1972 Collision Regulations and 1974 Safety of Life at Sea Conferences convened by IMO.  He attended the Third United Nations Conference on the Law of the Sea (1975-1977) as the representative of the Greek Ministry of Mercantile Marine at the multi-ministerial Greek delegation.

Between 1967 and 1972, he laid the foundations for the establishment of what has now become Greece’s Joint Maritime and Aeronautical Search and Rescue Centre.

Between 1972 and 1976, he regularly lectured at the Hellenic Coast Guard Academy and the Greek Master Mariners’ Centre of Superior Studies on shipping economics and policy and maritime safety/safety of navigation subjects, respectively.

Between 1977 and 1979, he was Harbour Master of Corfu, with responsibility for the sea area surrounding Corfu and all the nearby Greek islands.

Between 1989 and 1998, he led IMO’s efforts to establish a global Search and Rescue (SAR) Plan through regional Conferences in Lisbon, Cape Town, Seoul, Valencia and Fremantle and a Conference in Florence to specifically consider SAR matters pertaining to Africa.

In May 2000, he was appointed Assistant Secretary-General retaining his duties as Director of the Maritime Safety Division.

In June 2004, he was appointed Chancellor of the World Maritime University (Malmo, Sweden) and Chairman of the Governing Board of the International Maritime Law Institute (Malta).