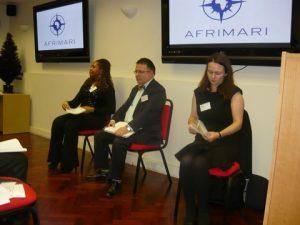 Africa has 3% to 4% of global container traffic, but 15% of the world’s population. So there is a lot of trade potential in the second largest continent, which spans 30m sq km – a landmass bigger than the US, Western Europe, India , China and Japan combined.  This statistical salvo opened a presentation by Steve Cameron, marine director at RTI Technologies, who is a leading expert on African shipping, to the December meeting of Afrimari. 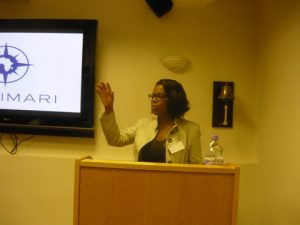 Afrimari is a flourishing London-based network of professionals involved in the Africa-related maritime, energy and trade sectors.

Mr Cameron said: “There is a lot of negative press [about Africa], so it is important to remind ourselves of the facts.” These included progress in transport infrastructure projects, and many privatisation successes in the oil and mining industries, and ports.

He singled out the privatisation of Nigerian ports as having led to a huge improvement in throughput efficiency, although this had not been matched on the pricing side. While cargo handling at Lagos was good, it could take three to five days to clear consignments beyond the berths because the port was hemmed in by the vast urban area.  To address this, Nigeria was building the new port of Lekki 60 km to the east, in the Lagos free trade zone. Due for completion by 2015, the port is projected by the Singapore-headquartered Tolaram Group to handle 2.5m teu annually, together with facilities for liquid and bulk cargoes. 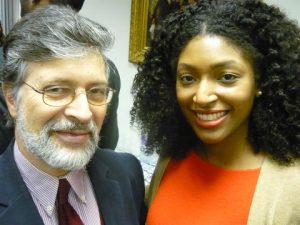 APM Terminals and a consortium of partners a few days ago announced plans to develop a huge port project and free trade zone at Badagry some 30 miles west of Lagos, which when it opens in 2016 may prove a strong competitor for Lekki.

The country is also building on reclaimed land near Lagos an environmentally-oriented development named Eko Atlantic City, with homes for 250, 000 people. “It just shows how dynamic is Africa, how much money people are investing in these new opportunities, ” said Mr Cameron.

Mr Cameron spoke of the “race for hub ports in Africa, ” with Morocco’s Tanger-Med in a strong position because of its proximity to Europe, and Djibouti also in the first tier of international competitors.  Dakar, Abidjan, and Lome, were among others competing for regional trade, and Tema was making a bid for more traffic.  One of the newer entrants, the South African port of Ngqura, 20km distant from Port Elizabeth, was making notable advances. Given it has the biggest throughput, Lagos should be a leading hub port, but its difficult Customs regime is seen as holding it back. 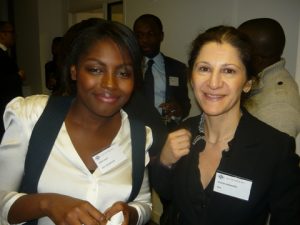 On the subject of piracy, Mr Cameron reminded the Afrimari meeting that no ship with armed guards on board had been successfully hijacked. “There needs to be a way in which the maritime industry can work with the Ecowas states to try to solve this problem.  It is an issue that West Africa needs to get to grips with.” Ecowas is the Economic Community Of West African States which comprises 16 countries in the region.

Mr Cameron said that much attention was given to countries that were former British colonies, but the Francophone bloc should not be forgotten: 29 countries with 394m people, using the CFA franc, a currency linked to the Euro, which made them in effect part of the Eurozone.

Later in the meeting, Uchenna Izundu, senior editor at IHS Energy Executive Insider, illuminated the background and implications of Nigeria’s long-awaited Petroleum Industry Bill, which sets out to transform the country’s entire oil and gas sector. 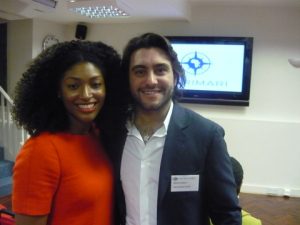 She began by outlining the stark contrasts in Africa’s most populous country. Nigeria is home to the richest black woman in the world: the oil tycoon Folorunsho Alakija, who is said to be worth at least $3.2bn, has recently taken over the top spot from Oprah Winfrey, according to Ventures Africa, a business magazine. As Africa’s biggest oil producer, Nigeria is exporting more than 2m barrels per day but still has to import most of its fuel products. More than 100m people of the 150m total population, live on less than $1 a day. Hotel rates in Lagos are the second most expensive In the world, because of limited availability and the need to price in the cost of security.

Ms Izundu went on to outline the provisions of a revised Petroleum Industry Bill setting out a new legal, fiscal and regulatory framework for the industry. 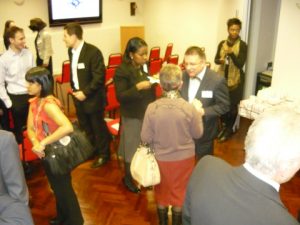 A view during the pre-meeting reception

The Bill is an attempt to end years of uncertainty which have been blamed for discouraging investment. Lack of agreement on a reform plan is reckoned to have cost $28bn in lost revenue in 2011. Some $40bn to $50bn of investment is on hold pending a clear outcome, said Ms Izundu.

The Bill was tabled by president Goodluck Jonathan to the National Assembly in July 2012. It is the latest of several attempts over the last decade to pass relevant legislation. The blueprint heralds the formation of a profit-driven national oil company equivalent to Statoil or Petrobras, to replace the Nigerian National Petroleum Company; deregulates the downstream petroleum sector; promotes transparency and openness; favours developing Nigerian content in the petroleum industry; and creates what would be known as the Petroleum Host Communities Fund to develop economic and social infrastructure of communities in the producing areas. 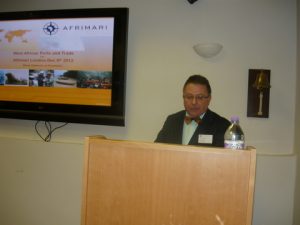 Ms Izundu bluntly stated that the oil and gas industry was “in a mess” (for example, only 18% of the 445, 000 bpd capacity of the refineries, is utilised) and although the Bill sounds great on paper, various interests have their reservations.

There is concern over the discretionary powers that would be conferred on the government. The draft would give petroleum resources minister Mrs Diezani Allison-Madueke wide-ranging supervision over the industry and the regulator. It has been reported elsewhere that oil majors have protested over the proposed taxation terms, with Shell and ExxonMobil saying that these would make deep offshore exploration unviable. Mrs Allison-Madueke has formed an ad hoc committee to carry out legislative work in regard to moving exploration out into deeper waters. 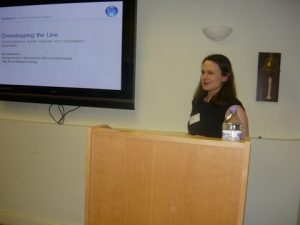 After angry protests over the attempted scrapping of fuel subsidies earlier this year, President Jonathan set up multiple inquiries, and these found shocking levels of corruption, which resulted in the national petroleum corporation and other companies being called on to repay Naira 1 trillion ($6.8bn) to the government.  Some people claiming to be importers did not have a single drop of oil to bring into the country.  As in Nollywood [Nigeria’s counterpart to Bollywood] movies, most of which are basement-budget productions, everyone was putting the blame on someone else, said Ms Izundu.

In a presentation entitled Overstepping the Line: Maritime Border Disputes and Hydrocarbon Exploration, Marne Beukes, energy analyst at IHS, examined the clash of ‘resources nationalism’ and reservoirs of billions of barrels of oil that crossed maritime borders.  The most recent dispute of this kind involved Kenya and Somalia. 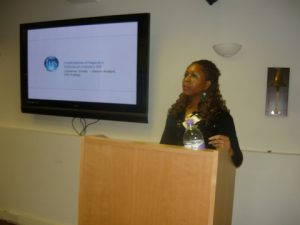 She said that United Nations Convention on the Law of the Sea (Unclos) stopped short of clarifying how to determine the boundaries for oil and gas reserves, “so really it is like playing chess on waters.” Ms Beukes said that governments lacked experience in delineating maritime borders among themselves, a task which needed geologists, hydrologists and mathematical models. Because of the huge importance of oil and gas, we should expect more maritime disputes, she warned.  There were important examples, however, of settlement of cross-border issues: Trinidad and Venezuela, the US and Mexico, and Norway and Russia. The political will needed to be there for it to work.

The Afrimari event was hosted at Artillery House by Mrs Jean Richards, chief executive of SecondWind Shipping Ltd, with conversation at a networking pre- and post-meeting reception enlivened further by a generous seasonal supply of punch, wines, soft drinks, dips and sandwiches.

Putin warns of foreign meddling in politics in Russia

Oslo Børs: Changes to the composition of the OBX Index from 21 December

Dear John and James, this is an excellent article reporting another splendid Afrimari evening ! Thanks and best wishes to all.
Jeffrey Blum