On behalf of General Motors (GM) Korea, GCS/Ruscon has established a regular block train service that will transport approximately 800 x 40ft containers per month from the Ust-Luga Container Terminal (ULCT) to Nizhniy Novgorod where the Russian motor manufacturer GAZ is now building Chevrolet Aveo cars for GM. Maersk Line is responsible for the carriage of these containers from South Korea to ULCT.

A new block train service is being launched by GCS/Ruscon out of the new Ust-Luga Container Terminal (ULCT). It will run a distance of over 1, 100km to Nizhniy Novgorod. Nizhniy Novgorod is Russia’s fifth largest city and is located over 400km to the east of Moscow.

Ruscon is a logistics and intermodal operator, being part of the GCS transportation group.

The service is being launched to serve the needs of General Motors (GM) Korea, which signed a contract in February 2011 with the Russian motor manufacturer GAZ to assemble its Chevrolet Aveo subcompact city car. However GCS is also offering capacity on the trains to third parties including carriers and shippers who route cargo via Ust-Luga.

Production of the Chevrolet Aveo began in December this year and the manufacturer is planning to assemble some 32, 000 cars per annum. 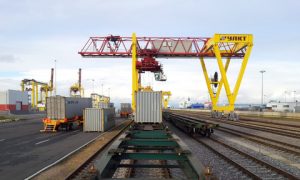 Ruscon uses its own flat-car wagons to form the trains and recently set up its own office in Ust-Luga.  In addition to railway transportation, Ruscon is arranging port and customs transit formalities for this project while ocean transportation to ULCT is arranged by Maersk Line.

The regular service starts this month (January) and volumes will build to around 800x40ft containers per month.

Ruscon is 100% owned by GCS and performs all container transportation services within the group, outside of liner agency, customs clearance, LCL and stevedoring.

In the near future, the group plans to further expand its existing companies and add new ones in order to match the growing demand for professional transport services in Russia, the CIS and further afield. A strategic target of GCS is to triple the volume of revenue and double its container throughput over the next five years. That will be achieved through consolidation of its vertically-integrated systems for seamless delivery of containers to any destination of Russia and world-wide.  In embracing that challenge GCS firmly relies on its more than 900 staff and close partnerships with leading Russian and international transport companies.

Ruscon is one of the leading transport operators in the Russian container industry today, being the multimodal branch of GCS. Its experienced team, counting more than 700 people in nine offices throughout Russia and CIS, handles almost 150 000TEU a year.

ULCT is part of the NCC group and its first phase annual capacity is 440 000 TEU. It covers a total area of 40 ha and has a quay length of 440m, With a depth alongside of 13.5m and four Panamax ship-to-shore cranes, it is able to handle much larger vessels than nearby St Petersburg and has better access to the open sea.

Managed by NCC and EUROGATE, Europe´s leading container terminal and logistics group, it offers a storage capacity of 15, 000TEU (including 840 reefer plugs). On-quay handling is provided by two RMG cranes and 11 RTGs. By 2025, NCC expects ULCT to have a maximum capacity of 2.85m TEU