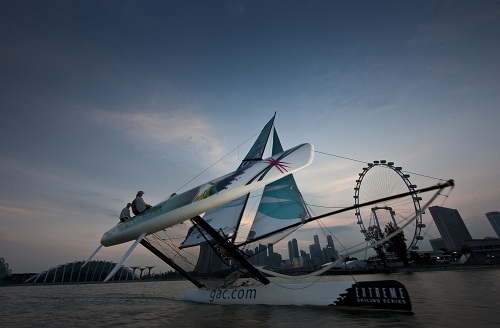 Recognised as a burgeoning talent, Tiller will be taking over from reigning match racing champion Ian Williams, who has made the decision to focus purely on his match racing commitments this year, as he eyes a 5th and record breaking world title. Joining Tiller on the GAC Pindar EX40 will be Stewart Dodson (Main), Harry Thurston (Trimmer), Matt Stevens (Bowman) and Shaun Mason (Floater). The ambitious new crew will certainly be putting in the hours to train, as they will not only be making their Extreme debut in just over a month, they will also be competing in the Red Bull Youth America’s Cup that begins later this year.

In a departure from what had been anticipated, Andrew Pindar, Team Principal of GAC Pindar, made the surprise announcement earlier this week. He explained in depth how his team had been working hard to pull together a combination of sailing talent and commercial backing to allow GAC Pindar to compete in this year’s Extreme Sailing Series. Pindar also discussed the heritage of Pindar Sailing Partners and that supporting young sailors was at the very grass roots of the GAC Pindar sailing programme.

Commenting on the announcement, the GAC Pindar Principal says, “This line-up isn’t what we envisaged a few months ago but various constraints caused us to re-think and re-evaluate our plans. A conversation between GAC Pindar’s Team Director Nick Crabtree and our old friend Harry Dodson opened up the possibility of working with Will and his crew.

“I first met Will at the 2011 Monsoon Cup and couldn’t help be impressed with the way he conducted himself both on and off the racecourse. Meeting talented sailors early in their careers has always been an important feature of our programme throughout our 30 year sailing history and it gives us great pleasure to add these young Kiwis to that story.”

Speaking from New Zealand, new GAC Pindar skipper Will Tiller adds, “Our team is incredibly excited at the opportunity to be partnered with one of the world’s leading sailing teams to compete in the 2013 Extreme Sailing Series. It is going to be very tough competing against the best in the business but this is the level of sailing our team has been striving to compete in and we look forward to taking up the challenge.

“Our team has a predominant match racing background but with the announcement of the Youth America’s Cup, our team has shifted our focus to multihulls. We have been training all summer in Auckland, NZ using F18s and A class catamarans. At the start of February, we will begin training in an EX40 before heading out to San Francisco for the Youth AC Trials. After that, we’re straight out to Oman to begin our preparation for the first Extreme Sailing Series event in early March.”