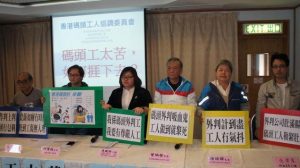 The port industry is currently booming in Hong Kong with container terminals across the country reported to have handled over 25 million TEUS during 2012. However, despite increased profits driven by the high productivity levels in ports, dockers themselves are not reaping the rewards and there are concerns over the deterioration of terms and conditions, particularly for casual workers, as outsourcing becomes more and more common.

Unions requested a 12 per cent pay rise for outsourced workers in recognition of the fact that many of them earn no more than they did 10 years ago despite greater workload and longer hours. In addition the committee has asked that the rate of pay for overtime be returned to it’s former standard of 1.5 times basic salary and that it apply to all dockers.

The committee requested that outsourcing companies enter into dialogue with the dockers unions who have spent years trying to communicate and negotiate with them in order to reflect dockers’ voices and bring about improvements in terms and conditions. This is something that, to date, they have been unwilling to agree to.

There was also a call for container terminal operators to put pressure on outsourcing companies to take responsibility for improving labour conditions and achieving better working environments for all dockers.   Hong Kong dockers coordinating committee coordinator Doris Sin Hiu Yan said: “There are more dockers working in HK ports who are employed by outsourcing companies than ever before. The aim of the committee is to secure improvements in pay and overtime rates for those workers and, perhaps most importantly, to reach a position where we can have a transparent and productive dialogue with outsourcing companies to the benefit of workers.”