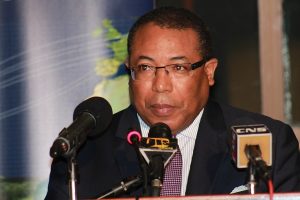 The World Bank Group has endorsed Jamaica’s aim to become the logistics hub for the Caribbean, Latin America and US Gulf & East coastal area by pledging to help find funding for the pioneering project.

Speaking in Kingston recently, Giorgio Valentini, World Bank Group representative to Jamaica, described the logistics hub initiative as ‘transformational’ and foresaw benefits for the whole Jamaican economy in addition to its maritime industry. “It is important to emphasise that the hub is not just about the port, it involves many moving parts and will significantly enhance Jamaica’s potential for growth, ” Mr Valentini said.

Jamaica’s proposal to become the fourth node in the global logistics chain, announced in January, is the centrepiece of the Government’s growth strategy and is expected to transform the Jamaican economy, create jobs and position Jamaica on the global value chain alongside Rotterdam, Singapore and Dubai. Jamaica’s plans intend to make the most of the significant economic opportunities expected to emerge from the expansion and development of the Panama Canal.

Thanking the World Bank Group for its support, Industry Minister Anthony Hylton said the endorsement brings the vision one step closer to reality. The Minister will lead a mission to Washington from February 18-22, 2013 to continue talks with the World Bank Group on additional areas of collaboration and support. Minister Hylton will also have meetings scheduled with international investors who have expressed an interest in the Logistics Hub Initiative, and will meet with private sector groups. The Ministry plans a public education campaign to keep the country appraised of how the public and private sectors can collaborate to transform Jamaica through the Global Logistics hub initiative.

A 16 person delegation from the World Bank group visited Jamaica and has already started to provide technical assistance in the development of the master plan for the logistics hub. The pillars of the master plan, which should be unveiled by June 30, will feed into the final version of the World Bank’s Country Partnership Strategy with Jamaica. This document will govern the relationship between the island and the World Bank for the period 2014-17.

· With the right investment and global partnerships, Jamaica can become the transhipment and air cargo logistics hub of the Americas and the Caribbean’s strategic handling point for bulk commodities; the Latin America and Caribbean centre for aviation-related maintenance, repair and overhaul and ship repair and dry docking

· Large corporations and logistics service providers will be encouraged to set up operations, control towers, headquarters and BPOs (business process outsourcing) in Jamaica