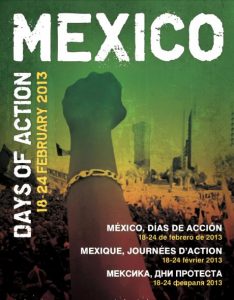 18 February 2013 – An international week of action spearheaded by IndustriALL Global Union to support workers in Mexico and demand an end to the violation of their rights kicks off on 18 February.

From 18-24 February, IndustriALL, the ITF, UNI Global Union, the ITUC and the Trade Union Confederation of the Americas and their affiliates will be presenting a declaration at a press conference in Mexico City, petitioning companies, visiting Mexican embassies and sending messages of solidarity to Mexican workers. Dutch affiliate FNV Bondgenoten is organising a protest outside the Mexican Embassy in The Hague on 19 February.

The campaign calls on the Mexican government to repeal the labour laws enacted on 1 December 2012, which the unions claim violate both Mexicans’ constitutional rights and ILO conventions and threaten workers’ basic rights to freedom of association, collective bargaining, strike action and decent work.   It also calls for an end to the use of employer-dominated protection contracts, the reinstatement of unlawfully fired union activists, free and fair union elections in a number of companies and justice for the families of the 65 miners killed at Pasta de Conchos on 19 February 2006.

Alfonso Bahena, ITF communications officer for the Americas, added: “This concerted action will put the Mexican government and unscrupulous employers under the global spotlight. We hope it sends a message loud and clear that the international trade union family will not stand by and allow them to ride rough shot over hard-won workers’ rights.”

As a prelude to the week, almost 7, 000 emails have already been sent in response to a IndustriALL/Labour Start campaign to the CEO of PKC in Finland demanding the reinstatement of union leaders and supporters dismissed from the company’s plants in Ciudad Acuña, Mexico in December 2012.

For more information about the week please visit www.industriall-union.org/mexico-campaign.

Birth of a giant: Nissaki is Vietnam’s biggest ship