HELMEPA presents at the SuPorts workshop at the University of Piraeus 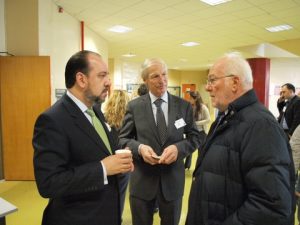 On the occasion of the awarding of PERS environmental certificates to four Greek ports (Corfu, Volos Kavala and Lagos) and one Italian port (Piombino), and within the framework of the European “SuPorts – Sustainable Ports” scheme, a workshop on the environmental management of ports was organised at the University of Piraeus on Wednesday, 20th February 2013. The “SuPorts” project, in which 10 stakeholders in total from 7 countries participate, is coordinated by the Transportation Systems Research Group of the Aristotle University of Thessaloniki, headed by Professor A. Naniopoulos.

Following an invitation by the event organizers, HELMEPA’s Director General, Mr. Dimitris C. Mitsatsos, gave a presentation on shipping-ports synergy relative to environmental protection. He elaborated on issues surrounding the legislative structure that governs the operation of a ship and the achievements of shipping with respect to the enhancement of safety and the significant reduction of marine pollution over the last 30 years, in parallel with the efforts of HELMEPA towards the training and updating of the human element. Based on this, Mr. Mitsatsos referred to ship, managing-company and seafarer expectations of the ports they enter and proceeded to present concrete proposals for the improvement of the ship-port interaction. 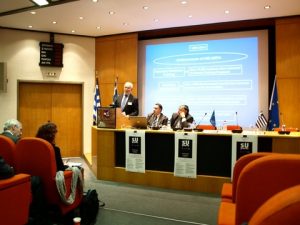 The fundamental aim of the workshop, during which a total of seven presentations were given, was to update the audience on the developments and outlooks relevant to the environmentally sound management of ports and to promote the activation of smaller ports towards following this path.