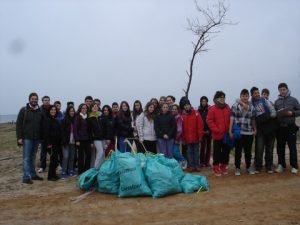 With students at the forefront and the support of local stakeholders, the activities of HELMEPA’s Marine Environment and Sciences Awareness Campaign began in the city of Komotini. The Campaign is being implemented across 12 Greek cities with the support of independent charity The Lloyd’s Register Educational Trust (The LRET*).

The Workshop on Marine Litter took place on Monday 18 February at the Cultural Centre “Kapnapothiki” of the Municipality of Komotini with the participation of representatives from local authorities, the Coast Guard, cultural clubs, students and teachers.

Conveying the warm greetings of the Prefect of Eastern Macedonia-Thrace and the Vice Prefect of the region of Rodopi, Regional Councilor Mr. I. Nikolaidis stressed the importance of raising the environmental awareness of youth in order to achieve sustainable development at the local level. Following, the Vice Mayor for Environmental issues of Komotini Mr. J. Ziloudis referred to the efforts of the Municipality in promoting recycling and thanked HELMEPA for this initiative that supports their goal. On behalf of HELMEPA, Mr. C. Triantafillou of the Environmental Awareness Section spoke about the close ties that have been developed during the past 10 years with students and teachers from the region of Rodopi who participate in the “HELMEPA Junior” environmental program and thanked the Municipality for placing the activities of the campaign under its auspices.

The inauguration of the Exhibition

The main characteristics of marine litter pollution in coastal areas of Greece and the Mediterranean were presented by Ms. Μ. Ktistaki of ΗΕLMEPA, while the coordinator of the Waste Management Authority of Eastern Macedonia-Thrace Mr. A. Petalas spoke about waste management in the Municipality of Komotini. Following, Dr. G. Sylaios of the Environmental Engineering Dept of the “Dimokriteio” University of Thrace presented the techniques and tools for the monitoring of the environmental status of the Thracian Sea, while the Director of the Management Body of the Nestos Delta and the Vistonida-Ismarida lagoons, Ms D. Michailidou, provided an overview of the main fauna species of the National Park of Eastern Macedonia-Thrace and the threats from human activities. The last presentation was by the Director of Environmental Education Centre of Maronia Mr. G. Serbezis and was about the relevant programs that the Centre provides for students and adults.

The Workshop came to a close with a brief demonstration of the environmental activities undertaken by the HELMEPA Junior Groups of the Minority Elementary School of Arriana in Rodopi. Congratulating the students, HELMEPA presented commemorative books for each of the Groups’ members to their 6 representative- Group Leaders, while their Teachers Ms R. Tsomof and Ms P. Geladari received commemorative Diplomas for their many years-long voluntary contributions to the program. Clearly moved by the gesture, the two volunteer-Teachers thanked HELMEPA for the Association’s support of the children’s work under difficult conditions and stressed that in their case the program constitutes a useful tool for teaching the Greek language to their students.

Following, the Exhibition titled “MarineEnvironment, ShippingandSciences” was inaugurated. The Exhibition will run in Komotiniuntil 6th Marchand will be visited by a total of 1, 500 primary and high school students.

On Tuesday 19 February the Exhibition welcomed its first young visitors, while a voluntary activity was also organized in cooperation with the Environmental Education Centre of Maronia. Specifically, 25 students from the 2nd and 3rd High Schools of Komotini enjoyed a guided tour of the Imeros Port by the Centre’s staff and then participated in a voluntary cleanup of the local beach collecting 13 large bags full of garbage.

* The Lloyd’s Register Educational Trust (The LRET) funds education, training and research programmes in transportation, science, engineering, technology and the safety of life, worldwide for the benefit of all. On 1 March 2013, The LRET will be assimilated into a new charity, Lloyd’s Register Foundation.