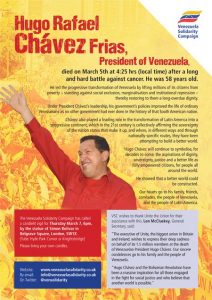 Unions across Latin America and worldwide have expressed their sadness over the death of Venezuelan president Hugo Chavez on 5 March.  Among the tributes were those from the Venezuelan Federation of Railway Workers and Unite in the UK.

Francisco Torrealba, elected member of Venezuela’s national assembly and president of the Federation of Railway Workers, said that it was a “sad day for the overwhelming majority of Venezuelans, and also for millions of people all over the world who agree with Hugo Chavez’s principles: freedom, the necessity of fair wealth distribution, the right to work with decent conditions, respect of democracy and above all the absolute respect of the principle of self-determination”.

He continued: “We sincerely thank the messages of solidarity from our British brothers and sisters of Unite and other trade unions that have expressed their sympathy. As workers we share the same principles and we should always stay together fighting for peace and progress, for decent working conditions, for the protection of adequate social services for all the population and above all to promote the unity of our people, starting from the workers. That was the message of our beloved Hugo Chavez Frias and you can rest assured that in the Republica Bolivariana de Venezuela we will keep up that fight, with you on our side. Hasta la victoria, siempre!”

Len McCluskey, general secretary of Unite, Britain and Ireland’s largest union, described Chavez as “a massive inspiration for all those engaged in the fight for social justice and who believe that another world is possible”.

He continued: “He embodied and represented a people who refused to accept that grinding poverty and social exclusion could be tolerated while massive wealth was stockpiled in the hands of a few.

“Under his leadership Venezuela has been transformed beyond recognition for the better. The control of the country’s huge natural resources has been placed back in the hands of the people and the wealth used to improve the lives of millions.”